Alfred Earnest Haigh opened for business in Adelaide’s Beehive Building on 1 May 1915. Haigh’s Chocolates became an Adelaide icon, although it wasn’t until the 1950s that they approached the high quality of today’s product.  Alfred’s grandson, John Haigh,  introduced new methods after training at Lindt in Switzerland.

Alfred Haigh was born in Adelaide in 1877, but grew up in Jamestown in northern South Australia. He began making boiled sweets in his home town, worked for a time as an engineer on the Perth to Kalgoorlie pipeline, then settled in Mt Gambier in1905. There he had a store where he sold his own ice cream and soft drinks.

Moving to Adelaide in 1913, he opened a shop in Unley. Then, in 1915 he bought the business of confectioner Carl Stratman in Adelaide’s Beehive Building. Haigh  produced a range of sweets, but initially all his chocolate was imported from Nestle in Switzerland. Chocolate-making equipment was eventually purchased from America. 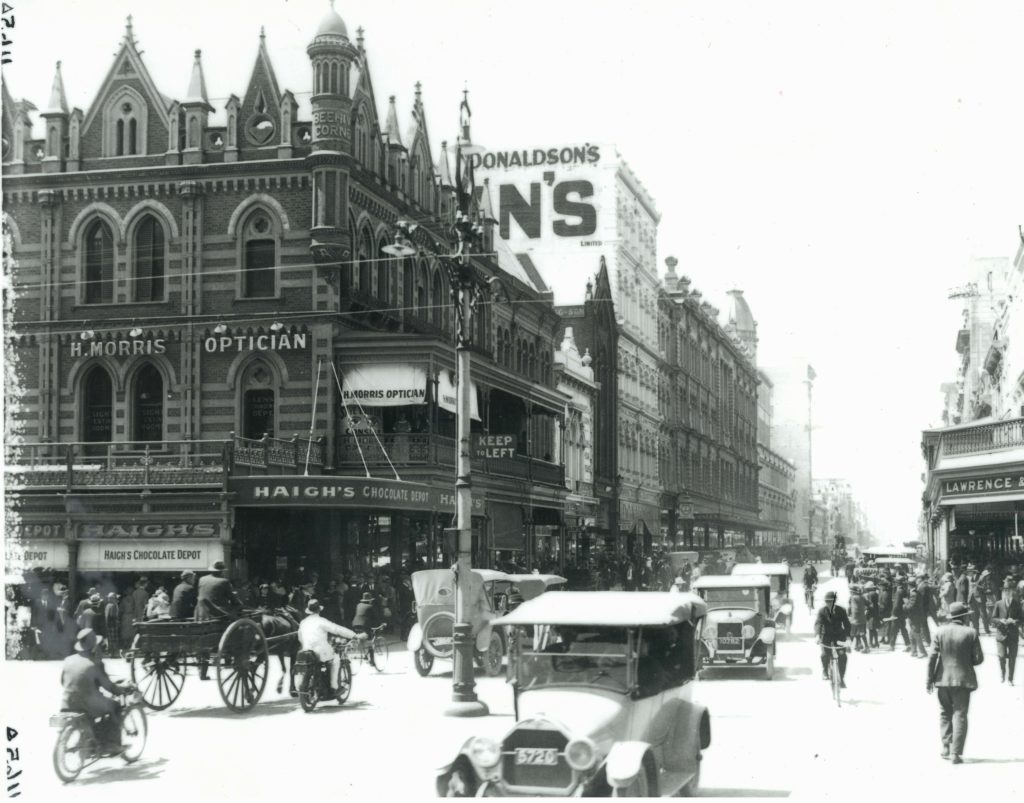 When Alfred died in 1933, his son Claude took over the running of Haigh’s Chocolates. But it was Claude’s son, John, who eventually transformed the business. In 1950 he arranged to spend time at the Lindt chocolate factory in Switzerland.  On his return he began to improve the quality of the manufacturing operation, with new equipment and methods.

Haigh’s Chocolates have always been sold through their own stores, although in the late 1950s and  1960s, they were often sold by “tray boys and girls” at theatres and cinemas. Haigh’s now have 14 stores in Adelaide, Melbourne and Sydney.

The Haigh’s Book of Chocolate by Cath Kerry tells the story of the company.