The Happy Little Vegemites song, used to advertise Australia’s iconic Vegemite spread, was written by Alan Weekes of advertising agency J Walter Thompson in Sydney. It was recorded in the EMI studios in Sydney and has been popular ever since.  The term “happy little Vegemites” has entered the language as a semi-ironic way to describe people who are satisfied with a situation.

The words of the jingle, which almost every Australian over the age of 40 could happily warble, were: 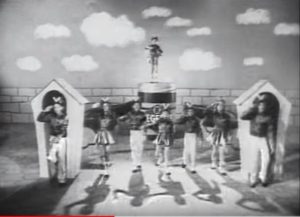 The happy little Vegemites jingle was initially used on radio, but with the advent of television in 1956 it was adopted as the sound track to a TV campaign. The commercial featured a troupe of precocious pantomime kids dressed in marching uniforms and performing a choreographed routine while singing the song, while a giant jar of Vegemite loomed in the background.

The jingle continued to be used into the 1960s, but its simplicity and naivety fell out of favour. It was only in the 1980s that the nostalgia value of the song was realised and it was revived. The retro feel then became a plus.

It seems there is a legitimate claim that people who consume Australia’s national spread are indeed ‘happy little Vegemites.” Research published in mid-2017 found that  those who eat Vegemite and other yeast-based spreads report they are less anxious and stressed than people who don’t eat them

Victoria University researchers conducted an online survey of 520 people in Australia, New Zealand and the UK to see how yeast-based spreads such as Vegemite, Marmite, and Promite affect the moods of those who regularly include them in their diet. The survey showed that those who regularly ate the spreads, which are rich in B vitamins, reported lower anxiety and stress scores.  However, the report’s authors emphasised that eating Vegemite should not be viewed as a replacement for the medical treatment of full-blown depression and mood disorders.