Cheap and cheerful was the order of the day as the recession bit. Part of the international chain, The Hard Rock Café opened in Sydney, with chirpy wait staff, loud music, American-style menu and rock memorabilia. In 1991 it was followed by Planet Hollywood. The original Hard Rock Café  Sydney closed in 2007 but has been revived by new franchisees. Planet Hollywood survives overseas (after two bankruptcies) but its Australian restaurants are long gone. 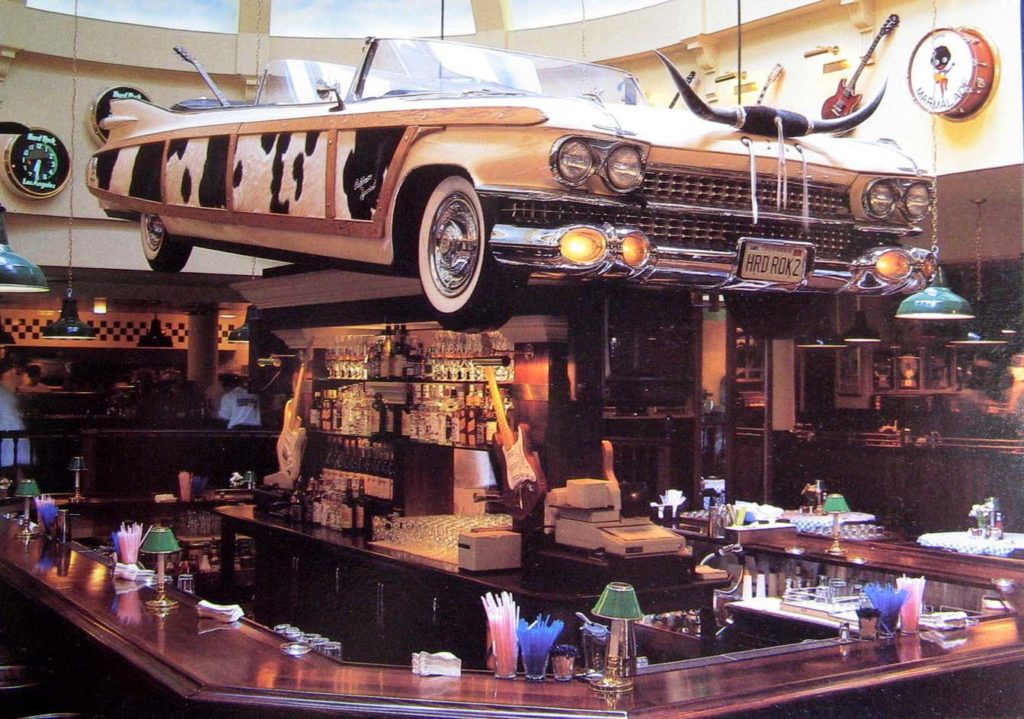 Strangely enough, the first Hard Rock Café opened not in the United States but in London. It was opened by two Americans, Isaac Tigrett and Peter Morton in an old Rolls Royce dealership in 1971. It was soon embraced by celebrities and everyday burger fans alike.

The collection of memorabilia began with guitars donated by rock legends Eric Clapton and Pete Townshend and has been expanding ever since. The Hard Rock now boasts that it owns Madonna’s BoyToy Wedding Dress, John Lennon’s glasses, Jim Morrison’s leather pants, the doors of the Abbey Road Studios, Elvis’s studded jumpsuit,  Frank Sinatra’s tuxedo and Michael Jackson’s red “Beat It” jacket among its 80,00o pieces of music history.

The first American Hard Rock Café opened in Los Angeles in 1982, followed the next year by one in Tokyo. The brand expanded to have casinos, hotels, cafés and live music venues world wide. In 2007 the brand was purchased by the Seminole Tribe of Florida.

The first Hard Rock Café in Australia opened in Crown Street, Darlinghurst and traded until 2007. A new café, opened in 2011 in the tourist hub of Darling Harbour. A Surfers Paradise Hard Rock opened in 1996. As of mid-2020, both were still going.

The menu continued to feature the old favourites – nachos, chicken wings, chicken mac and cheese and burgers, complemented by Hard Rock Gravy, Tennessee Barbecue Sauce, or Chimichurri. Or how about some hand-pulled smoked pork with hickory barbecue sauce on a toasted brioche bun? Served with seasoned fries, cowboy beans and citrus coleslaw.

There were concessions to Aussie tastes though: the menu included a chicken parma and the Aussie burger had beetroot. And even the Hard Rock was not a quinoa-free zone. You could go meat-free and order a homemade patty of quinoa, red onion, portobello mushroom, eggs, pecans, barley, soy sauce, and breadcrumbs, topped with hummus, arugula, tomato, grilled red onion and cheddar cheese.