John Hargreaves was Yorkshire born, emigrating to Melbourne in 1872. He moved to Brisbane in 1886 and set up a small jam factory. In 1891 he bought land to the east of the city at Manly and set up a new factory.  The following year the Hargreaves cannery began to can other fruits grown on the 320 acre (130 hectare) property. John’s sons joined the business and one of them, Charles, is credited with inventing the first machine to peel and core pineapple.

The area at Manly was known as “The Springs”, owing to a fresh water spring which was used irrigate Hargreaves’ orchards. Among Hargreaves and Sons’ popular products were canned tropical fruits, tomato sauce and confectionery including candied peels. The company even used indigenous produce, with the range including rosella jam.

Hargreaves exported fresh fruit and pulp and, as was the way of the time, exhibited the company’s products in grand exhibitions. They boasted of winning two gold meals at the Brisbane Jubilee Exhibition in 1909, and a silver medal at the Franco-British Exhibition in 1908. A postcard of the time shows the incredibly elaborate stand constructed for the Brisbane exhibition. 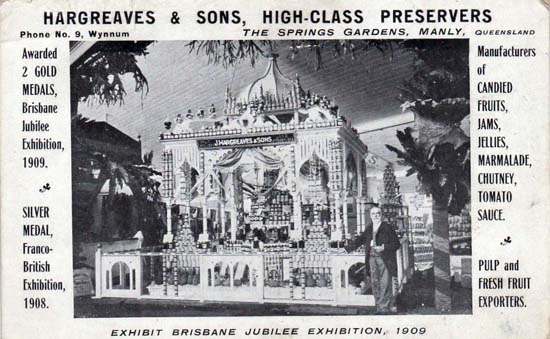 Hargreaves & Sons continued to impress at the local Exhibition. In 1926, The Queenslander exhorted locals to support their home state by buying the company’s products, writing:

Visitors stood amazed at the infinite variety of Queensland fruits. The quality could not be excelled. Yet one finds the careless shopper asking for jams and other fruit products from their local storekeeper, and accepting the produce of other States. It is the wife and mother who can do most for Queensland workers, and the employers. Let her say: “Queensland products by Queensland labour are by far the best,” and demand them.

The Hargreaves cannery was a major employer in the area. A limited liability company was formed in 1921 and the family continued to own most of the shares until 1936, when the company was sold to the Whatmore family. In 1963 the Hargreaves cannery was sold to Petersville, who changed the name to Edgell-Birdseye in 1969. The American food company Simplot acquired Edgell in 1995 and four years later closed the Brisbane factory. The land was sold for residential development.