Harry ‘Tiger’ Edwards operated a pie cart in Sydney’s Woolloomooloo  just before WWII, taking advantage of custom from the navy dockyards.  He enlisted in 1938, was invalided out in 1942, then returned with his pie caravan in 1945. Famous for its pie and peas, Harry’s Cafe de Wheels was patronised by sailors and celebrities, prostitutes and late-night revellers. The original caravan is now in Sydney’s Powerhouse Museum.

An entry in The Digger’s Scrapbook website records that Harry operated  his cart at Woolloomooloo for two years before enlisting in 1938. After being invalided out of the army, he returned to Sydney, driving a taxi and a fruit truck, then operating a mobile canteen at sporting matches from an old ambulance. He set up the first Harry’s Cafe caravan outside the Garden Island Naval Dockyard in 1945. As well as pies, hot dogs were included on the menu to cater to the taste of visiting American sailors.

The caravan acquired the name Harry’s Cafe de Wheels to comply with regulations that  required it to be moved at least 30cm (1ft) a day. However, it appears that in the 1970s the wheels were stolen, so for many years Harry’s Cafe de Wheels had no wheels at all. The pie cart became a Sydney landmark with a list of visiting celebrities that included Frank Sinatra, Robert Mitchum, Marlene Dietrich, Kerry Packer, Elton John, Sir Richard Branson and even Colonel Sanders. 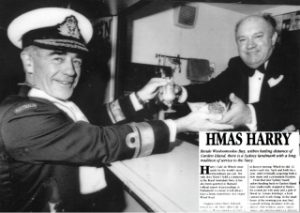 Harry Edwards retired in 1970 leaving an operator in charge of the van, then sold the business to Alex Kuronya, a Hungarian-born refugee from Austria, in 1975. In 1978, on the official 40th anniversary of the pie cart, Harry’s de Wheels cafe was formally commissioned into the Royal Australian Navy as one of its ‘unsinkable’ ships, and was called: HMAS Harry’s!  The ceremony was performed over a glass of champagne and a pie by Rear Admiral David Martin. Harry died in 1979.

Alex Kuronya donated the original caravan to the Powerhouse Museum in 1985, but continued to operate the business in Woolloomooloo until selling it to Michael Hannah on Australia Day 1988. The business now has franchises throughout Sydney and beyond, while the original site has National Trust classification.

One of the menu blackboards inside the caravan at the Museum, reflecting what was on offer in 1985, reads :

This menu does not include what is today Harry’s most popular product – The Tiger – named in the founder’s honour, which is a pie served with mash, mushy peas and gravy.

(My thanks to Harry’s Cafe de Wheels for permission to use these photographs. There are lots more in their photo gallery.)