The first ice in Sydney arrived in 1839. It had been harvested from North American lakes and carried through the tropics in a heavily insulated sailing ship, the Tartar. The ice trade was conducted by American and Norwegian entrepreneurs. Merchants in Australia, India, the West Indies and elsewhere built ice houses, where this precious commodity could be preserved and sold to the public.

In early colonial times preserving food was a challenge. Without any form of refrigeration, salting, pickling and smoking were among the few options available. Fresh meat, milk and vegetables spoiled quickly in Australia’s hot summer climate.

Elsewhere, ice had long been used to preserve food or to prepare refreshing drinks. It’s known that the Chinese were cutting and storing ice three thousand years ago and other ancient cultures set water out on cold nights, collecting ice in the morning. In the 1700s, in England and North America, wealthy families had their servants collect ice in winter. This was packed in salt, wrapped in thick cloth and stored in specially constructed ice wells for use in summer. 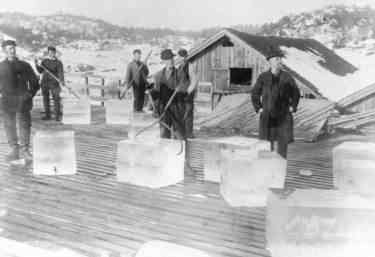 Then, in the early 1800s, a young American entrepreneur called Frederic Tudor conceived the idea of transporting ice from Boston to the West Indies. He reasoned that people in tropical climates would welcome the chance to have cool drinks and chilled food. His first trip, in 1806, was a failure, but over time he succeeded in creating a market for his product.

For a time, during the 19th century, ice became a major export of the United States, second only to cotton. While early harvesting was labour-intensive and done with hand saws, the process was soon mechanised. Accounts of the ice trade and the harvesting method were published in the English and Australian papers.

Tudor founded the Wenham Lake Ice Company, trading on the name of a Massachusetts lake particularly renowned for the purity of its water. Ice was shipped to England, the West Indies, Brazil and even, eventually, to India. Norway also entered the ice trade, supplying England and Europe.

The first load of ice arrived in Sydney from Boston in January 1839 followed a year later by a second shipment. The shippers also supplied ‘refrigerators’ – ice chests that could be used to keep food cool. Then there appeared to be a hiatus until the trade resumed in the 1850s. Adelaide’s first shipment of ice was advertised by theatrical entrepreneur George Coppin in 1848.

While the trade in natural ice continued elsewhere into the early years of the 20th century, in Australia it was replaced in the 1860s by manufactured ice. An account in the Adelaide Observer in 1861, which gave the value of the American ice trade as a million and a half sterling, said:

The large consumption of ice which these figures indicate shows how great a want the ice-machines now at work in these colonies are calculated to meet. By a very simple process, in which the evaporation of ether and the use of salt water are the main elements, Nature is successfully imitated, and Australia is supplied with a production which previously had to be brought from a distant country.

Australia had pioneered the manufacture of ice, when James Harrison of Geelong developed a prototype based on an 1834 British design for vapour-compression refrigeration. Harrison was a partner in The Sydney Ice Company, formed in 1860. While the domestic refrigerator was still in the future, people in metropolitan areas could now have regular visits from the ice man and ice chests became a fixture in many suburban homes.