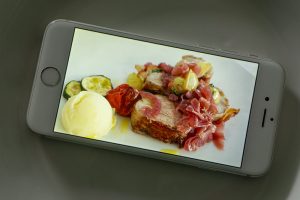 Instagram founders Kevin Systrom and Mike Krieger could hardly have predicted the effect their new social media platform would have on food – in particular, on restaurant food. Shortly after getting the platform up and running, Krieger posted a picture of his Vietnamese meal, starting an Instagram food photography trend that has influenced restaurant decor and made the appearance of food just as important as (or, some argue, more important than) the taste.

Soon, it was common practice for diners to photograph their meal before they ate it. The phenomenon,  called “Camera Eats First”, was enabled by the rapid adoption of camera phones, the first of which appeared in 1999. By 2010 it is estimated that there were more than a billion of them worldwide. A survey by the Commonwealth Bank in 2013 showed that by then 54 per cent of 18–24 year-olds in Australia had photographed their food while eating out, while 39 per cent had posted it somewhere online. Older age groups, it appeared were less likely to do so.

Instagram food photography took off and has continued to grow. As at January 2020 the hashtag #foodie had more than 141 million posts, #food had more than 369 million, while #foodporn had nearly 216 million. The continuing trend has led to a whole new industry, where consultants specialise in advising restaurants how to promote on Instagram, how to construct dishes that will look good on Instagram and how to have Instagram-friendly interior design.

Some restaurants have reacted against the trend, banning photography. Among the concerns is the disruption to other diners as would-be Instagrammers leap up or rearrange table settings to get the best shot. Some chefs are also concerned that the practice makes it easier for competitors to replicate their signature dishes. The desire to be visually different has also led to some bizarre inventions, including weird coloured lattes, glitter gravy and the “Selfieccino”.

One Sydney patisserie, Black Star Pastry, has built its business on the back of what has been called the “world’s most instagrammable dessert”. Its strawberry watermelon cake  now has a worldwide following and has been sold in pop up stores in Melbourne, Singapore, Hong Kong and Japan.