Newspaper proprietor James Harrison, of Geelong in Victoria, was among the pioneers of refrigeration. He created Australia’s first vapour-compression refrigeration system using ether. In 1851 he developed his ice-making machine. In 1854 it began operation commercially, a patent was granted in 1855  and he was commissioned to build a refrigeration system for the Glasgow & Co. brewery in Bendigo. His system was soon in use for meat packing houses and breweries.

James Harrison was born in Scotland and studied chemistry while he was apprenticed to a printer in Glasgow. He emigrated to New South Wales in 1837. Harrison continued working in his trade, moving to Victoria two years later where he founded, edited and eventually became the proprietor of the Geelong Advertiser.

He invented the world’s first practical vapour compression refrigeration system after noticing, when cleaning metal type with ether, that the evaporation of the ether cooled the metal.  His system used a compressor to force ether vapour into  a condenser where it reverted to liquid form and moved through refrigeration coils.  As it evaporated into vapour again, it cooled the machine. 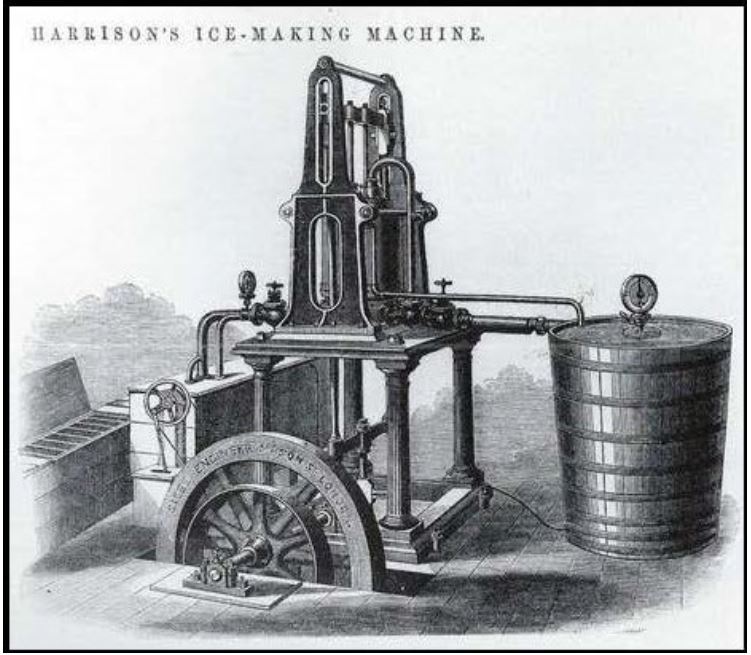 Harrison built his first experimental machine in 1851 and in 1854 built the world’s first commercial ice-making machine. He later opened the Victoria Ice Works in Melbourne and then became a partner in the Sydney Ice Company. In 1873, he was awarded a gold medal at the Melbourne Exhibition by showing that meat kept frozen for months was still edible. He proposed that it could be shipped to England for seven shillings a ton.

However, Harrison’s attempt to ship meat to Britain ended in disaster. Rather than freeze the meat, he constructed an ice-cooled cold room on the ship the Norfolk. Unfortunately, he underestimated the amount of ice required and how quickly it would melt and 25 tons of meat was spoiled in transit.

After this, Harrison patented further refrigeration systems in Britain, where he was a correspondent for The Age.  He returned to Australia and settled in Geelong shortly before his death in 1893.