Although cookshops operated by Chinese immigrants had no doubt existed earlier, it seems that the first documented Chinese restaurant was opened by John Alloo at Bakery Hill on Ballarat’s goldfields in 1854. The restaurant served European-style food. It was later moved to Main Road, Ballarat.

John Alloo (originally Chin Thum Lok) was born in Guandong (Canton). He arrived in Australia in the 1840s, prior to the gold rush. It’s possible that he was an indentured labourer; from the 1830s onward Chinese labourers arrived to work on rural properties where many became cooks.

His restaurant, on the Eureka Lead, Ballarat’s main gold seam, catered to the local miners. With the slogan “Soups always ready”, the menu also included plum puddings, jam tarts, roasted and boiled joints and all kinds of vegetables.

John Alloo became a leading figure in the local community and was appointed as the interpreter for the first Chinese Protector, William Henry Foster. He married a Scottish woman named Margaret Peacock. In the 1860s Alloo moved to Otago in New Zealand, where gold had also been discovered. There he became an interpretor for the police force and was the first ethnic Chinese to be sworn in as a police constable. He died in 1889.

A reproduction of Alloo’s restaurant, as depicted in a painting by Samuel Thomas Gill, has been erected at Ballarat’s Sovereign Hill heritage village.

The gold rushes brought many more Chinese to Australia. They soon began to establish communities in Sydney and Melbourne which developed into the cities’ Chinatown districts with their concentration of restaurants. Chinese people in rural areas also established restaurants which often, like Alloo’s, served European-style food. 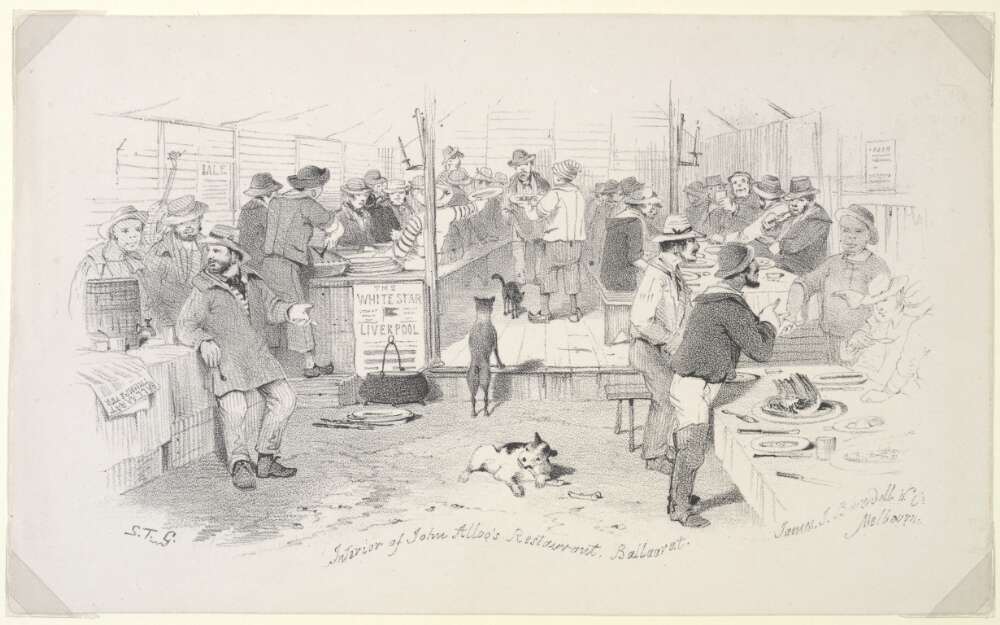