Harland Sanders opened his first restaurant in 1930 in the front room of a gas station in Corbin, Kentucky, naming it “Sanders Court & Café.”  Six years later he was made an honorary Colonel by the state governor.  Inventing his famous chicken recipe in 1940, he first franchised it not in Kentucky but in Salt Lake City, Utah, launching the Kentucky Fried Chicken brand at the Harman Cafe in 1952.

In 1955 Colonel Sanders began to expand his franchising operation, opening stores throughout North America. In less than ten years there were more than 600 outlets throughout the USA and Canada.

The company went on to become the world’s largest fast-food chicken chain. The first Australian Kentucky Fried Chicken outlet was opened in Sydney in 1968. Colonel Sanders visited Australia in 1970 and was seen to enjoy a pie at the infamous Harry’s Café de Wheels pie cart at Woolloomooloo, Sydney. He died in Louisville, Kentucky, on December 16, 1980. 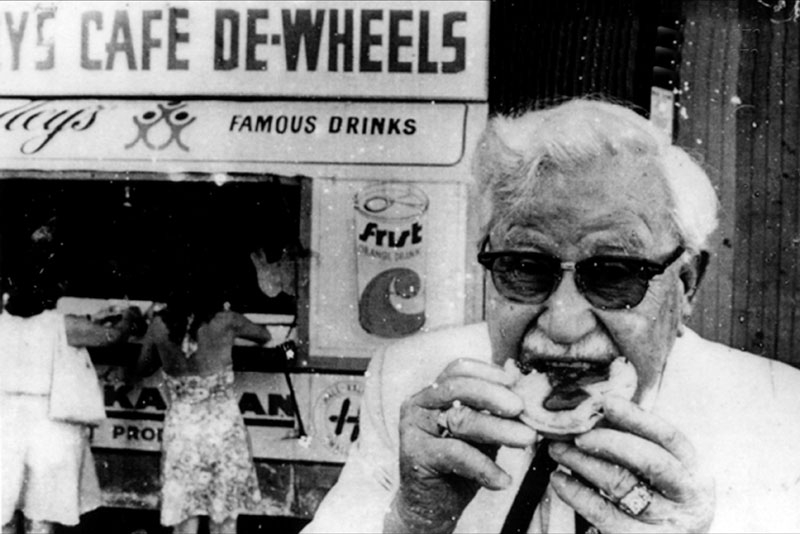 Kentucky Fried Chicken is the world’s second-largest restaurant chain after McDonald’s. According to Wikipedia, as of December 2015 it had almost 20,000 locations globally in 123 countries.  The chain is owned by Yum! Brands, a company that also owns the Pizza Hut and Taco Bell chains.