The first Kentucky Fried Chicken outlet opened in Guildford in Sydney’s western suburbs on 27th April 1968, with a staff of 25. It was opened by a Canadian named Bob Lapointe  and started the fast food revolution in Australia. The line at launch was “finger-lickin’ good”.

By January 1970, when Colonel Sanders visited Australia, there were 38 stores and they were opening at the rate of one a week. The company said they hoped to have 180 stores operating by the end of 1973. Stores were controlled by franchise holders. The parent company said at the time that they hoped that Kentucky Fried Chicken would become the first billion dollar food organisation in the world by the end of the 1970s.

The launch commercial, shot at the Guildford store, featured marching girls and all the fun of the fair.

The offerings on the first Kentucky Fried Chicken menu ranged from one piece of chicken and chips (not called fries at this point) for 45 cents to a “Barrel” with 21 pieces of chicken for $5.20.  A large serve of chips was 50 cents. 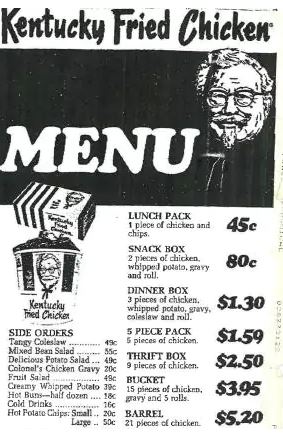 Today’s menu is considerably more diverse. Back then there were no sliders, Twisters or burgers – just fried chicken. And definitely no Hot & Spicy. In 1991, Kentucky Fried Chicken officially became KFC, ditching the word “fried”.

Today, KFC is owned internationally by Yum! Brands, who also own the Pizza Hut and Taco Bell brands. Yum! directly owns around 160 KFC stores in Australia, with the remainder owned by franchisees.

In 1969, Canadian-born Jack Cowin bought the right to open ten KFC franchises in Western Australia. His business, Competitive Foods Australia, went on to own around 50 KFC outlets in Western Australia and the Northern Territory. Cowin also established Hungry Jack’s through an agreement with the American fast food chain Burger King.

In 2013 Cowin sold his stores to Collins Foods, who are now franchisees for 223 KFC stores throughout Australia – most of them in Queensland and Western Australia. Collins Foods also owns KFC stores in Germany and the Netherlands.

As of 2018, KFC has more than 640 restaurants in Australia, employs more than 34,000 people and serves more than 2 million customers each week. It is the second largest fast food chain in the country, after McDonalds.