1917 The Berliner becomes the Kitchener Bun

During World War I, the antipathy towards all things German even extended to food. In South Australia, the popular doughnut-like bun called a Berliner was renamed as a Kitchener Bun. It is unique to South Australia, no doubt part of the State’s strong German heritage.

The Berliner, (Berliner Pfannkuchen or just Pfannkuchen in its native Germany), is a kind of doughnut without a hole. It’s made from yeast dough, usually deep fried and filled with jam, and dusted with sugar. No doubt it arrived in South Australia along with other traditional Prussian or German fare – one of the many food traditions preserved in places like the Barossa Valley.

Variations on the Berliner occur in many countries around the world, with fillings ranging from crème patisserie to custard to chocolate-flavoured dulce de leche. The South Australian version – and in Australia these pastries can only be found in South Australia – is slashed along one side and filled with whipped cream. 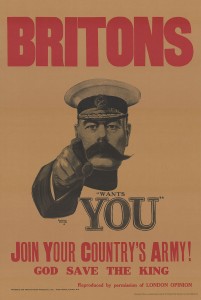 However, it hasn’t been called a Berliner in South Australia since 1917. That’s when, in a fervour of anti-German feeling, the Nomenclature Act was passed changing the names of many South Australian towns with German connections. So Hahndorf became Ambleside and Bismarck became Weeroopa. And, although it probably wasn’t mentioned in the Act, the popular Berliner became a Kitchener Bun.

They were named after Lord Kitchener, the British Field Marshal who was famous for his victories in colonial wars in Africa (and, in Australia, for ordering the execution of Breaker Morant). He became the British Secretary of State for War in the first years of World War I and his face adorned an iconic recruiting poster. Kitchener lost his life in June 1916, when HMS Hampshire struck a German mine en route to Russia on a diplomatic mission.

His name was immediately commemorated throughout the British Empire, with buildings, landscape features and even whole towns named after him. In Canada, a town called Berlin was controversially re-named Kitchener. Berlin, Kitchener. Berliner, Kitchener Bun.

Bakeries in South Australia now sell both Berliners and Kitchener Buns. It seems the Berliner now has a jam or custard filling and a sweet icing, while the Kitchener Bun is filled with jam and cream.