The Melbourne entrepreneur,  Fred Walker, had been experimenting with the processing of cheese. Learning about the process that had been developed and patented by J L Kraft, he travelled to the USA and obtained the Australian rights for Kraft Cheddar processed cheese. In 1926, the Kraft Walker Cheese Company was formed in Melbourne- the parent company for Kraft Foods Ltd.

The recent registration of the Kraft-Walker Cheese Co. Pty. Ltd. marks entry into Australian business of an important American concern. The new Australian organisation will undertake manufacture of Kraft cheese and allied products for distribution throughout the Commonwealth and New Zealand. In addition it is expected that it will handle a considerable part of the trade now done with the East by the American and Canadian Kraft companies, with the probability of extension in other directions.

The article pointed out the expected effect the manufacture of Kraft Cheddar would have on the cheese business in Australia. While the first factory was to be located in Victoria, the company had plans to build further manufacturing facilities in other Australian states and in New Zealand.

Initially the plan was to buy cheddar cheese from existing manufacturers, which would then be ground,  pasteurised and re-formed into the rectangular loaves of Kraft Cheddar that were so convenient for packaging. Ultimately, though, the company planned to make its own cheese.

The company claimed to have significantly expanded the cheese market in the United States, increasing the per capita consumption of cheese from 2 ¾ pounds (1.25kg) per  year to just over 4kg per year “in the last few years”. This amounted to an increase of about 150 million pounds (more than 680,000kg) a year in the consumption of cheese in the United States. The implication, of course, was that a similar increase would occur in Australia. 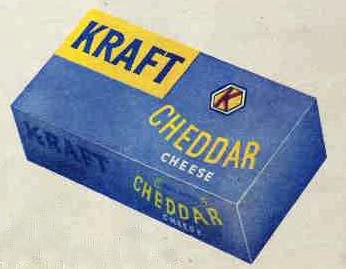 In 1930 Fred Walker, touting the ‘cleanest and most economically run of all the Kraft factories in the world’, stated that he currently had over a million pounds weight of cheese on his premises, with the hope of increasing the output considerably in the future.