By the 1980s, tastes were changing.  Kraft launched  feta cheese, a satay sauce range and olives, as well as a range of low fat products. The Kraft brand had been around in Australia since 1926 and was originally associated with bland processed cheddar cheese, either in blocks or slices. The range diversified, and by 2017, two thirds of Australian homes had a Kraft product in the cupboard or the fridge. 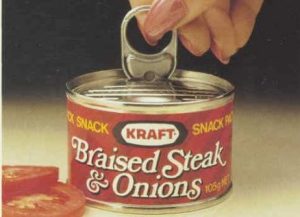 But there were many non-cheese products as well (including the Kraft brand on our home-grown product, Vegemite). A range of salad dressings boasted “little or no oil”, in line with the 1980s focus on low fat products. Perhaps less-than-gourmet were the “little ripper” snack packs, also launched in 1980. The three varieties were “appetising Braised Steak & Onions, mouth watering Beef Steak & Gravy or tasty Beef Curry”.

The Kraft range at that time also included peanut butter, Philadephia Cream Cheese, various kinds of mayonnaise (including a polyunsaturated version) and a range of dips: French Onion, Smoked Oyster, Gherkin and Pineapple. Pineapple may not have been a winner. By 1982 it seems to have been dropped from the range in favour of Onion & Bacon and Spicy Italian.

From 2012, after a de-merger,  the Kraft brand in Australia became the property of Mondelez International, which was sold to Bega Cheese in 2017.