Think Leggo’s is Italian? Nope. Their heritage is Cornish. Henry Madren Leggo was the son of Cornish immigrants who arrived in Victoria’s goldfields during the gold rush. In 1894, he bought the Bendigo grocery distribution and manufacturing business where he’d worked since 1882. The company is now owned by American giant Simplot.

The Simplot website gushes “Leggo’s is proud of its fine Italian traditions and has been a part of Australian cuisine since 1894.” Well Henry Leggo may, as the Leggo’s website claims, have sold his mother’s sauces and pickles to hungry miners in the gold rush town. But there was nothing Italian about them. Leggo is a Cornish name, common in the towns of Penzance and St Just. Henry’s father was a Cornwall-born miner, attracted to the Victorian gold fields.

In fact, there’s some doubt as to whether the products subsequently sold by H. M . Leggo & Co. had anything to do with Henry’s mother. The business was well-established before he took over, being founded in 1881 by Frederick Rickards. Henry began working there soon afterwards, became a partner six years later, then bought the business and gave it his name. 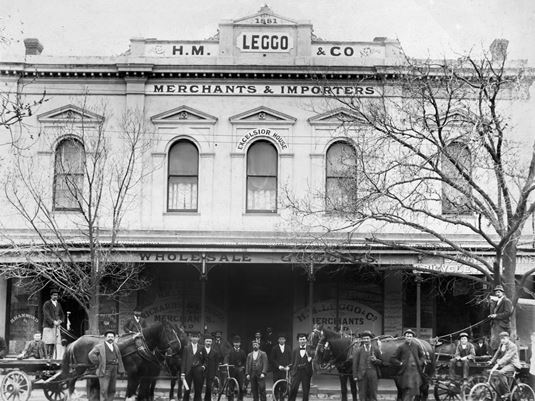 As well as manufacturing vinegars, sauces, pickles, soup, cordials, jams and other grocery goods, Henry bought a coffee, tea and spice business. He later closed the coffee business to concentrate on condiments, preserves and canned foods. In 1925 and 1926, Leggo’s Tomato sauces were awarded first, second and third prizes and Champion gold medals at the Bendigo Show.

Henry died in 1937. By the 1950s, the company was struggling to make profits and sold the Abbotsford property, moving to Mentone in 1956.  The range appears to have been reduced, with a focus on tomato paste and pickles. In the early 1970s, the Leggo’s brand was acquired by the Danish company, Plumrose.  By 1975, the Italian myth was in the making, with the issue of the Leggo’s Italian Cookbook and advertisements using the line “Leggo’s. The authentic Italian touch.”

The brand had a series of ownership changes in the corporate merry-go-round of the 1990s. In 1995, Leggo’s was acquired by Simplot Australia, a newly-formed subsidiary of the American J R Simplot Company. The Italian myth persists with “Leggo’s authentico” now registered as a trade mark. It’s a pity they don’t still make tomato sauce. It would go well with Cornish pasties.