In 1921, in Sydney, a group of businessmen, reportedly Americans, formed a company “To acquire by agreement from Mint Products Company, New York, the right to use the name Life Saver, together with the formulae for the manufacture of sweets, etc.” Life Savers were launched in the eastern states the following year with dramatic newspaper advertisements. Eventually acquired by a consortium dominated by MacRobertson’s of Melbourne, the Australian licence for the brand was sold to Nestlé in 1985. It reverted to Australian ownership in 2018.

Life Savers were invented in Ohio, USA, in 1912 by candy-maker Clarence Crane. He sold the patent to Edward John Noble who  founded the Life Savers and Candy Company in 1913. The first product was Pep-O-Mint, packed in rolls surrounded by foil. In 1919, the new flavours Wint-O-Green, Cl-O-Ve, Lic-O-Rice, Cinn-O-Mon, Vi-O-Let and Choc-O-Late were introduced to the range.

It’s notable that one of the first directors of the new Australian company, Life Savers Sweets Co. Ltd, was an E. J. Noble – surely the same man. Another of the directors, R. P. Noble, was almost certainly his brother Robert Peckham Noble, who was CEO of the American company until the late 1950s.  It seems that the consortium used the local firm of James Stedman Henderson to manufacture the sweets at their Petersham factory and a new joint company, Sweet Sales Ltd, was formed to distribute them, with Henderson as a director.

(Just to complicate matters, James Stedman’s wife was Margaret Noble and his oldest son was named James Noble Stedman. Were they related to the New York Nobles?  Or was it just a coincidence?)

The new company launched Life Savers in Australia in 1922 with a series of display advertisements in major papers in Queensland, New South Wales and Victoria. Although the language sounds a little flowery today and included some execrable puns (“reel-y good candy” and “six holesome flavours”), the campaign was executed very professionally for its day.  The range initially consisted of three flavours: Pep-O-mint, Cinn-O-mon and Cl-O-ve.  In 1923 three new flavours were added to the range: Lic-O-rice, Vi-O-let and the highly unappetising C-O-ugh. In 1924, the distributors had a special promotional vehicle constructed. Shaped like a giant roll of Pep-O-mint Life Savers, it toured the country.

The initial choice of flavours makes it plain that Life Savers were originally envisaged as a semi-medicinal product in the vein of the breath-freshening lozenges that had been around for centuries. They had other advantages too. Because of the hard-pressed format they were guaranteed not to stain ladies’ gloves and the foil wrapping meant you could put them in your pocket without ending up with a sticky mess.

The success of the “candy with the hole” grabbed the attention of other confectionery manufacturers around Australia and together they created a new company to buy both Life Savers Sweets Co. Ltd and the distribution company. The partners in this 1925 deal were Melbourne’s MacRobertson’s,  James Stedman Henderson Sweets Ltd of Sydney, M. H. Tandy Ltd of Adelaide and Mendes Ltd of Melbourne. They called the new company Life Savers (Australasia) and it was publicly listed.

The  following year, MacRobertson’s secured a majority shareholding in the company and promptly moved the manufacturing operation to its factory in Fitzroy, Melbourne, although the head office remained in Sydney. 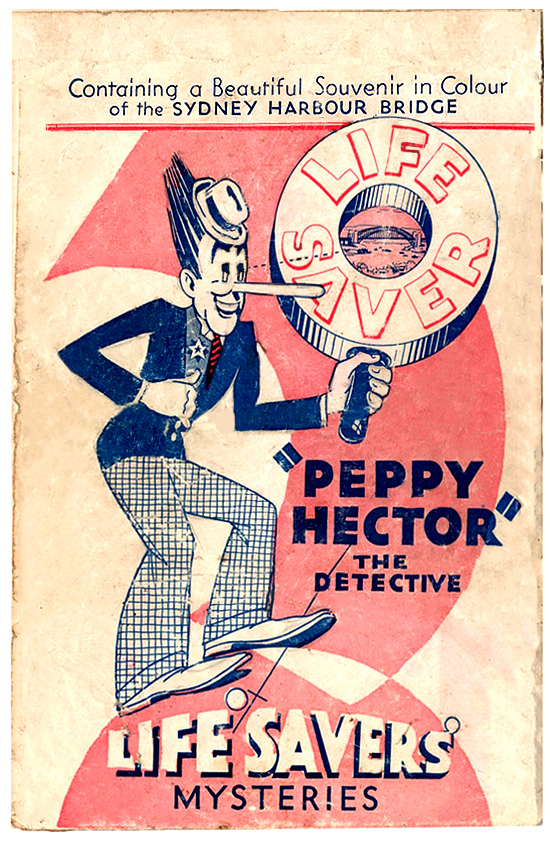 As the years went by, MacRobertson’s too, came up with novel advertising ideas.They produced series of “Life Savers Mysteries”, involving a detective known as Peppy Hector.  In 1932, to celebrate the opening of the Sydney Harbour Bridge, a special edition included a souvenir picture of the bridge. This was included in a special promotional bag of Life Savers sweets, available for a shilling.

The company also advertised in cinemas. The National Sound and Film Archive has a silent black and white film advertising the Cryst-O-mint flavour. While they claim this dates from 1925, other sources claim the flavour was not launched in America until 1932.

Over the years, new flavours were introduced. It seems that musk, a flavour unique to Australia, first appeared around 1932. By the 1950s, there were 12 flavours, including the much stickier fruit varieties. C-O-ugh, unsurprisingly, had disappeared. Now Life Savers were advertised with colour pages in Australian Women’s Weekly. 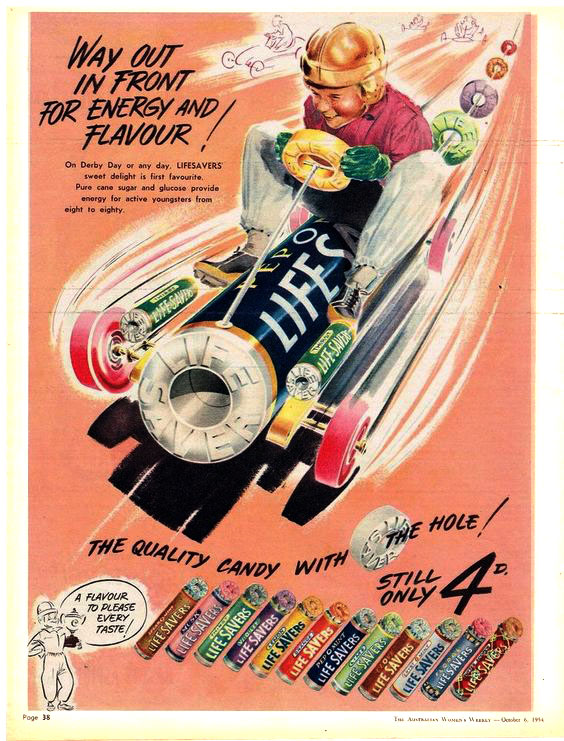 Advertisements from 1954 show 12 flavours: Spearmint, Musk, Thirst, Vi-O-let, Lemon, Orange, Pep-O-mint, Lime, Cl-O-ve, Cryst-O-mint, Floral and Butterscotch. They don’t show the popular “five flavours” roll, which had different fruit flavours. Perhaps it arrived in Australia later than 1954. This also seems to be the year when another peppermint variation, Stick-O-pep arrived. 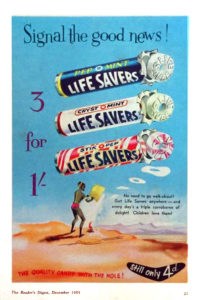 In 2018, Nestlé decided to unload some of its confectionery brands. The Life Savers brand has now been acquired by all-Australian Darrell Lea, continuing a trend for some of our iconic products to return to local hands.