The first branded, fat-reduced milks arrive, along with low fat salad dressings and cholesterol-free mayonnaise. In 1982, the Australian Nutrition Foundation developed the Healthy Eating Pyramid, which recommended lots of complex carbohydrates, so we could all eat pasta without feeling guilty. 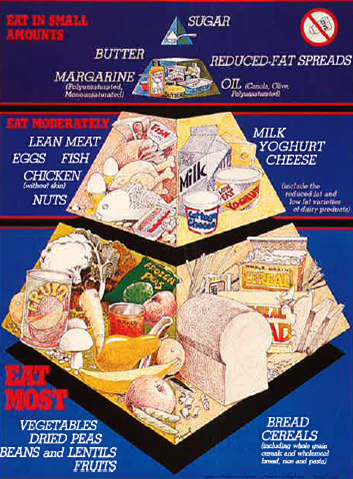 The Healthy Eating Pyramid originally lumped fruit, vegetables, legumes, bread and cereals together on the bottom layer of the pyramid, with the label Eat Most.  The second layer, Eat Moderately, applied to lean meat, eggs, fish, chicken (without skin), nuts, milk, yoghurt and cheese, with an exhortation to include the reduced fat and low fat varieties of dairy products. The Eat in Small Amounts level included butter, margarine, oils and reduced fat spreads, while sugar had its own little section right at the top.

The Healthy Eating Pyramid has evolved over the years. In the 2015 version, fruit and veg have retained their position in the foundation layer, while grains have been bumped up to have their own layer. Legumes join meat and dairy towards the top. The biggest change is that many foods have vanished altogether.  Instead of “bread and cereals” we now have “grains” – presumably to remind us not to eat the pappy white stuff. Butter has gone. Sugar has been banished. The aim of the new pyramid seems to be not to feature any of the things we shouldn’t eat, ever. The only fats featured are “healthy fats”.

The new order of things reflects an increasing consciousness that eating unlimited carbs is not, perhaps, a good thing. The focus on low glycemic index (low GI) foods in the early 2000s indicated that maybe we should curb our cravings for pasta and mashed potatoes after all.