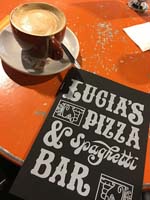 Lucia’s Pizza Bar opened in 1957 and may well be Australia’s first pizza restaurant (a title claimed for many years by Toto’s in Melbourne).  The cafe, at Adelaide’s Central Market, served home-style Italian pizza and pasta and still has a reputation for the city’s best pizza margherita.

The business was opened by Lucia Rosella, who had emigrated to Adelaide with her husband in 1956. Lucia grew up in in a village called Pago Veiano, less than 100km north of the birthplace of pizza – Naples. Lucia’s husband, Pasquale, had been a prisoner of war in Australia during World War II. Some years after being repatriated at the end of the war he decided to return with his wife and two daughters.

The daughters, Nicky and Maria continue the business t 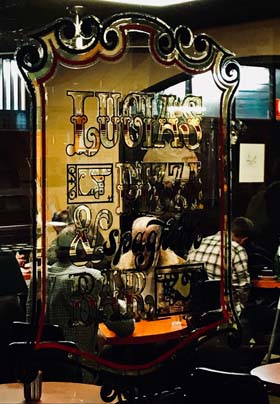 oday. It is now known as Lucia’s Pizza & Spaghetti Bar and the menu extends well beyond pizza.

The business has expanded to  include a food store – Lucia’s Fine Foods –  supplying specialty ingredients, including their own brands. They claim their tomato-based pasta sauces are only made in summer, when freshly harvested full-flavoured tomatoes are available.

Lucia’s pizza and pasta sauces are now available through some specialty food distributors in New South Wales, Queensland, Victoria and South Australia as well as at their store  at the Adelaide City Market.