MacPherson Robertson began making sweets in 1880 and by the late 1920s had 17 factories employing 2600 people. The Max-Mints Alphabet Book was an advertising pamphlet produced in 1927  and sent free of charge to any child who wrote to the company supplying their name and address. The mints were probably MacRobertson’s answer to Sweetacres’ Minties, which were launched in 1922. They look remarkably similar.

The National Library of Australia has the Max Mints Alphabet Book in its catalogue and the whole book is available online. Their description, in part,  reads as follows:

Each letter of the alphabet is illustrated with line drawings accompanied by a four-line poem about Max-Mints organized by children’s names from Arthur to Zechariah. Some of the poems reference nursery rhymes, but others suggest an older audience. 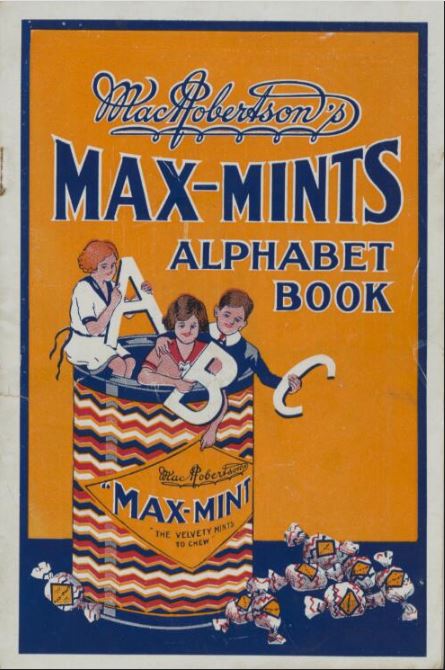 The booklet also includes three pages of crossword puzzles, with solutions; an interior view of the Max-mints factory; a brief history of MacRobertson’s, which relates the “fairy tale” humble beginnings of “the greatest confectionery establishment in Australia, and one of the largest in the world”; a portrait of the founder and proprietor of MacRobertson’s, Macpherson Robertson “looking down on models of the factories where 1,000 kinds of chocolates and confectionery—including ‘Max-Mints,’ ‘Columbine Caramels’ and ‘Old Gold’ chocolates—are made”; and a pyramid formation group portrait of the MacRobertson staff of 2,600 employees, who were then paid a total of £500,000 annually.

The Max-Mints Alphabet Book was advertised in daily papers and issued in illustrated wrappers. The writers were stumped for a child’s name when it came to the letter ‘X’. The rhyme for this letter read:

Although X looks forbidding
And cold and hard as flint
It adds a wealth of sweetness
When it’s placed ‘tween MA and MINT.

One hopes the now-forgotten Max-Mints weren’t also as cold and hard as flint. They were described on the pack as “The velvety mints to chew”, which suggests a softer texture similar to that of Minties, a product that has long survived its competitor.