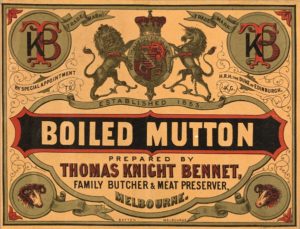 The first Australian meat canning works were opened in Sydney by Sizar Elliot. Others soon followed and canned meat became a significant export to Britain. Canning plants were established around Australia, initially canning beef and mutton. By the 1870s, however, many plants were primarily canning rabbit as the introduced animals began to over-run farming areas.

The process for meat canning was invented in the 1790s in France when Nicholas Appert experimented with heating food inside sealed glass jars.  The first tinned meat was produced in England in 1820, when the instructions for opening the can began: “Cut round on the top near to the outer edge with a chisel and hammer”.

Sizar Elliot was an English-born merchant who set up in Sydney as a ship’s chandler in 1839. He was involved in various import/export businesses, including wine, lambskins and timber. He pioneered the meat-canning business in Australia as a response to a glut of livestock. At that time, many sheep were simply being slaughtered and boiled down for tallow to make soap and candles, with the meat being used as fertiliser.

At that time, all cans were hand made from heavy tinplate, with the lids soldered on after the can was filled. They were large, commonly holding 6 lbs of meat. Elliot heated his cans in a bath of whale oil over a gas flame. Although he succeeded in selling some of his meat to whaling captains, and won medals at a series of Sydney shows, he lacked  capital and his meat canning venture was a commercial failure.

Later in the 1840s other canneries were established at Camperdown, Victoria and Newcastle, New South Wales. The latter, labouring under the name of the Newcastle New South Wales Fresh Provision Preserving Company, was a venture by William and Henry Dangar.  The company produced soups, beef and mutton packs and mock turtle, in cans that ranged from one to 12 lbs. Much of the meat was exported to England. However, in the 1850s, drought and the extra demand created by the gold rush pushed up the price of meat and these ventures, too, foundered. The Newcastle cannery closed in 1855. 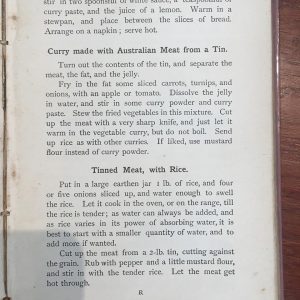 Then, in 1865, prompted by an outbreak of cattle disease in Britain that created a demand for imported canned meat, Charles Tindal founded the Australian Meat Company in Northern New South Wales. The Melbourne Meat Preserving Company was established the following year and by 1870 was the largest meat packing company in Australia, producing fresh meat as well as canned meats, meat extract, fertilizer, tallow, skins, and hides.

In the decade 1869-79 the Australian meat preserving industry exported some 65,000 tons of preserved meats to England.  English cook books such as Reeves Cookery (1885) began to include recipes specifically for Australian canned meat.