While not an Australian dish, Melba toast belongs here thanks to its name. Invented by noted chef Escoffier at London’s Savoy Hotel, Melba toast may first have been called “Toast Marie” for the wife of the hotel’s manager, César Ritz. In 1897 (according to most sources) Australian opera singer Nellie Melba was feeling ill while staying at the hotel. The thin, dry toast suited her flagging appetite and was consequently renamed in her honour.

Melba toast is made by toasting a slice of bread, then carefully splitting it through the middle exposing two untoasted surfaces, which are then toasted under a grill. The result is very thin, crisp toast. It became popular in America in the 1920s as part of an Eighteen Day Reducing Diet said to have been prescribed by the Mayo brothers (although the Mayo Clinic has subsequently denounced the regime that relies primarily on eggs, grapefruit and, yes, Melba toast). The toasts are now produced commercially. 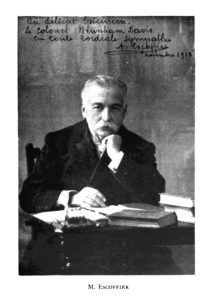 Melba toast was not the only dish Escoffier named after the opera diva. It seems he was quite a fan of the singer who was born in Richmond, Victoria, as Helen Porter Mitchell. Changing her name in 1887 when she began performing in Europe, Nellie Melba toured extensively, also performing in London and America as well as during trips back to Australia.

The most famous of Escoffier’s tribute dishes was Peach Melba, a dessert of peaches, vanilla ice cream and raspberry purée. The story goes that he created the dish after watching Melba perform in Wagner’s Lohengrin at Covent Garden, where the production included a beautiful boat in the shape of a swan. The dessert was presented to the diva the following night in a silver dish atop a swan carved from ice and was originally called Pecheau Cygne, or “peach with a swan.” The raspberry purée was not part of the original dish, but was added some years later when Escoffier was employed at London’s Ritz Carlton Hotel. It was then re-named Pêche Melba. 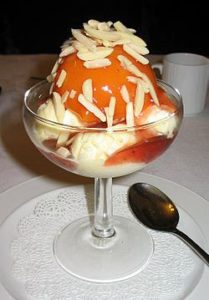 Choose 6 tender and perfectly ripe peaches. The Montreuil peach, for example, is perfect for this dessert. Blanch the peaches for 2 seconds in boiling water, remove them immediately with a slotted spoon, and place them in iced water for a few seconds. Peel them and place them on a plate, sprinkle them with a little sugar, and refrigerate them. Prepare a liter of very creamy vanilla ice cream and a purée of 250 grams of very fresh ripe raspberries crushed through a fine sieve and mixed with 150 grams of powdered sugar. Refrigerate.

To serve: Fill a silver timbale with the vanilla ice cream. Delicately place the peaches on top of the ice cream and cover with the raspberry purée. Optionally, during the almond season, one can add a few slivers of fresh almonds on top, but never use dried almonds.

As well as Peach Melba and Melba Toast, Escoffier named two lesser known food creations in Melba’s honour. Melba Sauce was a sweet purée of raspberries and redcurrants (something of an echo of Peach Melba there) while the Melba garniture was tomatoes stuffed with chicken, truffles and mushrooms in a rich white sauce.