Australia’s oldest food society, the Melbourne Beefsteak Club, was founded in May 1886.  Members were from business, professional and academic circles. The club based itself on the Beefsteak Club of London, one of the oldest of English clubs, and met on the first Saturday of every month. Its objects were the promotion of good fellowship, and conversation on “things philosophic, literary, musical, artistic and social”. Not to mention indulging in large helpings of red meat.

As with other men’s clubs, the Melbourne Beefsteak Club has its own arcane rituals. Membership was limited – initially to 16 but by 1930 to 21 – and all members were expected to attend every meeting. The chair was taken by each member in rotation and went by the title of “Master” while the secretary was termed the “Recorder” and the group described themselves as “the fraternity of the golden gridiron”. There was ceremonial dress: the Master wore a red scarf and golden gridiron, while the “Boots” (the most lowly member) was adorned with a silver boot on a chain. The motto of the club was “Beefsteak and Brotherhood”. Only one non-member was permitted as a guest at each meeting.

Melbourne Punch described a meeting in 1899, when the menu consisted of soup, “followed by an enormous dish of grilled beefsteaks done to a turn, and accompanied by numerous side-shows in the shape of oyster, onion and horse-radish sauces”. This was followed by sweets, and a range of liquors. The writer, there as a guest for the session he described, was impressed by the appetites of club members.

The way these doctors, barristers, solicitors and well-known men, notable in their professions, “pegged away” at those steaks, laughing and chatting like boys at a muffin-struggle, was a sight to be remembered. The fact 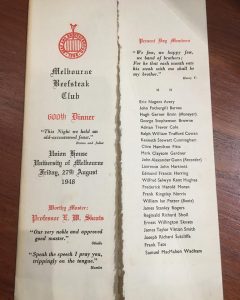 that there were three doctors there may account for the zest with which all present did their best to ruin Host Wilson [the proprietor of the Palace Hotel at which the meeting was held]: but certain it is Dyspepsia withering fled, and Indigestion sighed farewell. Not one of the sixteen seemed yet to have realised the fact that he had a liver.

Dinner was followed by the reading of the minutes and a short paper read by the Master, then each member was called upon for a song, a recitation or an anecdote.

The Melbourne Beefsteak Club endured, celebrating its 400th dinner on 11 August 1928 at the Hotel Windsor, its 500th at the Oriental Hotel in 1939, and its 600th at University House in 1948. In 1986 the Centenary Dinner was also held at University House.  The Canberra Times reported that the dinner was attended by the Governor General, Sir Ninian Stephen and his wife, suggesting that the “men only” rule of the club had, by then, been abandoned.

The Beefsteak Club was just one of the gentlemen’s clubs that were formed in Melbourne in the latter half of the 19th century. In their early days many were anti-establishment and had a bohemian air.  It may still be, however, that for those who aim to join the elite, Melbourne may seem, as Manning Clarke once remarked,  like a wilderness of closed doors.