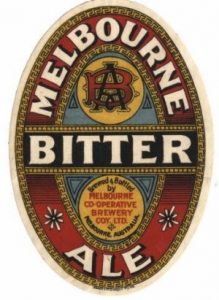 Melbourne Bitter was born in 1904, when a group of pub owners formed the Melbourne Cooperative Brewery Company and began producing beer in Abbotsford, Victoria. Over 150 publicans were shareholders. Melbourne Bitter gained a reputation as a premium beer and was distributed in other states including Queensland, Western Australia and the Northern Territory.

Victorians were great beer drinkers. In the 1870s, the average per capita consumption was 84 litres a year, a thirst that was quenched by 126 commercial breweries in the colony. By the early 1900s, a new Beer and Excise Act passed by the Federal Government had led to the consolidation of breweries.

In Melbourne, major breweries depended on “tied” pubs for much of their business. These pubs were owned by the breweries and leased to the licensees, allowing the breweries to fix prices.  In 1904 a group of independent pub owners challenged the system by starting their own brewery:  the Melbourne Cooperative Brewery Company.

The original head brewer was James Patrick Breheny, one of a family of brewers working in Queensland, Tasmania and Victoria. The first beers produced at Abbotsford were Melbourne Bitter Ale, Abbot’s Lager, Abbotsford Stout, Extra Double Stout, Sparkling Ale and Dinner Ale. In 1924, the company was merged with Carlton & United Breweries. The Abbotsford brewery was to become CUB’s only Melbourne brewery.

There are, in fact, conflicting stories about the origins of Melbourne Bitter. According to CUB’s official website, the beer was “created by renowned brewer Jack Prendergast in 1936” and sold to Carlton and United Breweries later that year. However, there are many newspaper references to Melbourne Bitter before that date, including a story that it was the first drink airman Burt Hinkler had after making the first solo flight from England to Australia in 1928. This suggests that while the name and elements of the label date back to the early 1900s, perhaps the recipe, now made with Pride of Ringwood hops, changed in the 1930s. 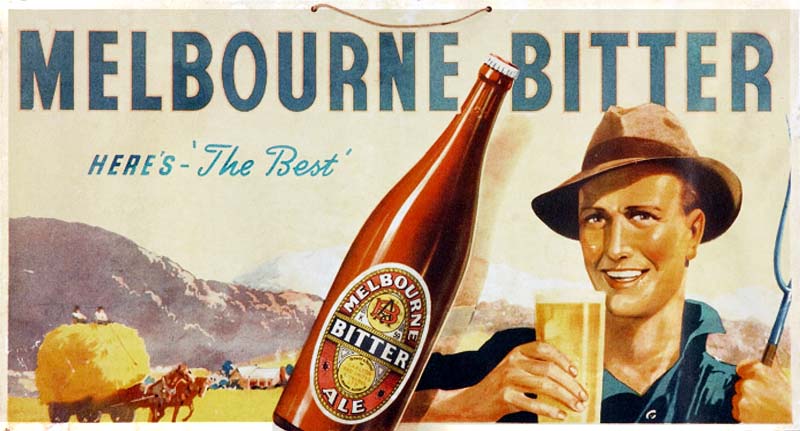 It seems that Melbourne Bitter was held in high esteem through the 1930s and ‘40s. During WWII, one letter from the front in North Africa mentions seeing a large picture of a bottle painted on a wall by a nostalgic digger. The image bore the caption “The best drink is Melbourne Bitter – if you can get it”. There are also numerous references to the brand in newspapers in states beyond Victoria, flying in the face of parochial attitudes regarding local beers.

Beer advertising was more genteel in those days. A newspaper ad, featuring a drawing of Olinda in the Dandenong Ranges, waxed lyrical. Under a headline “As old as the hills” it read:

Who, among us, has not felt the lure of the hills … friendly old hills which have stood staunch beneath the storms of centuries? Who has remained unmoved when from the summit he sees the countryside spread before him … the fields like green patches on a crazy quilt and the roads ribboning through the pattern? One may also ask, who could remain unmoved when offered a friendly, foaming glass of rich and refreshingly wholesome Melbourne Bitter – a traditional beer finely brewed.

Despite this somewhat pretentious approach, it seems that while Victoria Bitter may have dominated in its home city, Melbourne Bitter was the preferred beer in country Victoria and in regions beyond. Legendary country singer and song-writer Slim Dusty, who recorded a whole album of songs to drink beer by, said it was his favourite.

In recent years, this quiet achiever has made something of a come-back. In 2015 Melbourne Bitter was on tap in selected pubs – the first time it had been available other than in cans and bottles. Apparently it had “hipster” appeal, clearly to those who rejected the rugged masculinity associated with the Victoria Bitter brand.