The ‘Early Kooka’ range of gas stoves was developed by Metters, a company established by Frederick Metters in Adelaide in 1891. The company originally manufactured fuel stoves and advertised as  ‘stove and range makers, ironfounders, engineers, coppersmiths, sheetmetal workers’.  The Early Kooka range was released in 1917.

The first design Frederick patented was the “top-fire” fuel stove, with a firebox located between the oven and the cook top. The Metters company continued to make these until the 1970s, and in the 1990s a competitor acquired the original castings and produced them until 2009. The success of the fuel stove led to the company’s expansion, with a second factory being set up in Perth in 1896.  In 1898, Frederick took on a partner, Henry Spring, and the organisation was named Metters & Company.

Over the next thirty years, the company expanded and diversified into other products including other domestic appliances, water tanks, agricultural machinery and enamelled bathtubs. New factories were built in New South Wales and Victoria and the firm acquired a business in New Zealand. In 1927, the holding company General Industries Ltd. was formed. 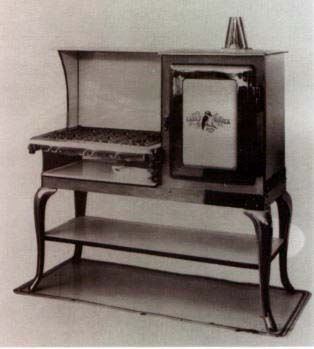 By the time the Metters Early Kooka was launched in 1917 gas stoves had been around in Australia for more than 40 years. The early stoves were cast iron, just like their wood-burning forebears, and nearly as difficult to clean. Improvements to design saw the stoves  lifted off the floor on legs and advances in technology allowed the whole body of the stove to be enamelled.

By the 1930s the Early Kooka also come in a “split level” model, with the oven on either the left or right hand side of the cook top. The early stoves had no thermostat, with the oven burners needing manual adjustment to control the temperature. For some time thermostats were available as an option at extra cost, but in the 1930s a model called the ‘Thermett’, with a thermostatically controlled oven, was introduced.

Gas was the preferred method of cooking until the 1950s, when electric cooking began to be promoted as quicker, cleaner, better and cheaper to operate.