The first time Australian milk was distributed in cartons was in the Beverley Hills area of Sydney in 1955, when Mr. V. C. Halfpenny, a Lakemba milkman, served 1000 customers per week with milk in waxed paper containers. This trial of milk cartons was soon followed by wider distribution in the Sydney area. The cartons were made in Sydney by Hygienic Containers Pty Ltd. 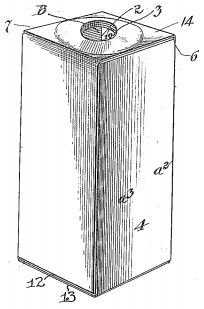 Milk cartons were invented in the USA in the early part of the 20th century. Although there is some controversy about the identity of the actual inventor, most sources seem to credit John Van Wormer, who obtained a patent for his carton in 1915.  Milk may have been sold in paper cartons earlier than this, but Van Wormer was the first to design a pre-folded blank box suitable for mass production.

The patent application described his milk carton as “A paper bottle comprising a rectangular body having flat sides, a flat bottom, and a top wall provided with a round hole forming the mouth of the bottle, the said top having a raised section of which said hole is the center, said section being externally convex and internally concave, whereby said hole may serve as a round pouring opening for said bottle, and said top having corner portions disposed in a horizontal plane intersecting the outer and lower circular edge of said section.” The card used for the carton was coated with paraffin wax. 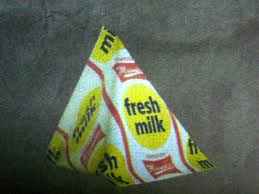 In the 1940s in Sweden, development began on a what became the Tetra Pak – a tetrahedron shaped package lined with plastic. The driving force behind this design was Dr Ruben Rausing. By 1951, the new packaging system was established in Sweden and by 1958 the triangular packs were being used by the Model Dairy in Melbourne and Brownes Dairy in Perth. Some Australian sources erroneously point to these being the first milk cartons in Australia, ignoring the earliest Sydney products. The Tetra Pak also appeared in Sydney in 1959, but was used for flavoured milk.

The next development was the so-called ‘gable top’ rectangular carton with the push-pull opening spout that we know today. It was developed in the early 1960s by a Detroit engineer with the strangely appropriate name of Lepore. This remains the most common format for milk cartons in Australia.

In Australia, milk cartons took more than ten years to gain general acceptance.  By 1968 in Victoria, only about 1% of milk was sold in cartons. There was much debate about the adoption of single use cartons instead of multi-use bottles. However, because of breakages, Melbourne alone required 160,000 new glass bottles every week to keep up the delivery of 1.3 million bottles of milk a day.

By 1972, with the introduction of milk into supermarkets, milk cartons had 20% of the market, and by 1987 only about 2% of milk was still being sold in glass bottles.