First marketed as Nestlé’s Tonic Food, Milo powder was developed at Abbotsford in Sydney and launched at the Royal Easter Show. The chocolate and malt powder is mixed with hot or cold water and/or milk.  Although it was invented in Australia, it is now sold around the world, including in Malaysia, Singapore, Columbia, Peru, the USA and Canada. A ready-to-drink version was introduced in 2015.

Milo was launched during the Great Depression and was designed to help provide undernourished children with both the calories and the vitamins and minerals missing from their diets. The chocolate malt flavour was a way to make the drink palatable to children. The name has classical roots: it’s named after Milo of Croton, a Greek wrestler who lived in the 6th Century BC and possessed legendary strength.

The product was invented by  a chemical engineer called Thomas Mayne from Smithtown, NSW. According to the Nestlé website, it was originally meant to dissolve completely in milk, but when Mayne saw his own children scooping the crunchy bits off the top of their milk he realised that it gave MILO a unique feature. 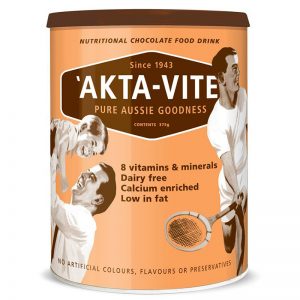 Soon a competitor entered the market. Akta-Vite was another chocolate drink designed to provide nutritional benefits to children, pregnant women, the sick and the elderly. It was made by the Nicholas family, best known as the makers of Aspro.

Both drinks were marketed for many years as a source of energy (read calories) for active children and Milo fostered relationships with sporting organisations to reinforce this image. When the Health Star Rating system was introduced in Australia from 2014,  Nestlé initially labelled Milo with 4.5 stars. They argued that this reflected the recommendation that three teaspoons of the product be dissolved in a cup of skim milk.

There was outrage from public health groups, who pointed out that in a regular serve of Milo powder, 46 per cent is sugar and that it was unlikely that children would be consuming it in skim milk.  In 2018 Nestlé gave in to the pressure and removed the star rating from the packaging. In 2019, a revised formulation was released with 30% less sugar.