The Mr Whippy ice cream van company was founded in Birmingham, England, in 1958. Just four years later the franchise was extended to Australia. The founder, Dominic Facchino, shipped 10 pink and white  Commer Carrier vans to Sydney in 1962 and the distinctive Greensleeves melody soon became a kid-magnet around the suburbs.

Facchino was inspired by an American operation called Mister Softee, selling soft-serve ice cream in cones from a fleet of roving trucks. The idea of using music to announce the truck’s arrival in the neighbourhood had a long history in the US. It’s said Facchino adopted the Greensleeves tune because it was allegedly written by Henry VIII, one of his favourite historical figures. 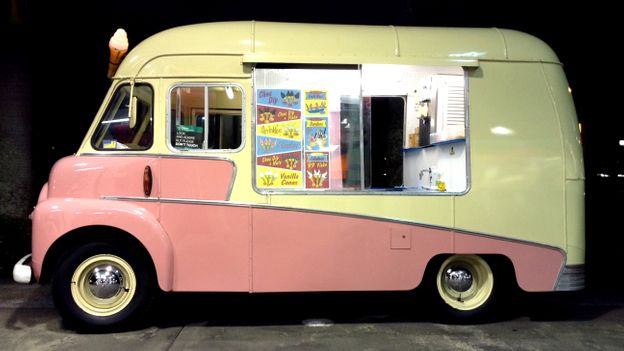 The first vans imported to Sydney were soon followed by more and in 1964 the Mr Whippy company extended operations to New Zealand. The UK company was acquired by Walls and Unilever in 1966 but  continued to operate the franchise in the antipodes. By the mid-1970s, the  company had imported about 200 Commer vans to Australia and around 50 Austin vans to New Zealand. At that point, the physical vehicles were sold to private operators and the brand began to retail through shopping centres.

It seems the UK company allowed the Australian trademark to lapse or, perhaps, put it up for sale, as the Mr Whippy trademark was registered here in 1982 by an ice cream parlour company.  In the year 2000, the business was bought by the Franchised Food Company. At that time there were 30 retail outlets on Australia’s east coast. 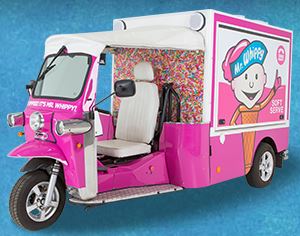 In 2015, Franchised Food Company announced plans to take Mr Whippy soft serve back to the streets, this time using three-wheeler tuk tuks instead of vans. However, as of 2020, the brand is not listed among the company’s franchises. There seems to be at least one tuk tuk operating in Melbourne as of 2019, but they claim to be the only and original.

The problem for the trademark owners is that the name has become a generic term for an ice cream truck. As long as we have our soft serve, we don’t really care whether it’s “genuine” Mr Whippy or not. One of the original ice cream vans has been operating (perhaps in contravention of trademark law) at Hervey Bay in Queensland for more than 35 years.