This English cook book was equally popular in the British colonies and became a household bible for many Australian households. The first edition of Mrs Beeton’s book was published by Isabella Beeton’s husband, Samuel Beeton. At the time, Isabella was only 25. Like many books of its time, it borrowed recipes extensively from previous cook books. Later editions included a section on Australian cookery.

We like to imagine Mrs Beeton as a kind of Victorian-era Margaret Fulton, growing comfortably older as she issued edition after edition of her famous cook book. In fact, she was only 23 when the first installment of her book was published in 1859. It was initially released in 24 parts, which were finally collected into a book with the extremely ponderous title of:

The Book of Household Management, comprising information for the Mistress, Housekeeper, Cook, Kitchen-Maid, Butler, Footman, Coachman, Valet, Upper and Under House-Maids, Lady’s-Maid, Maid-of-all-Work, Laundry-Maid, Nurse and Nurse-Maid, Monthly Wet and Sick Nurses, etc. etc.—also Sanitary, Medical, & Legal Memoranda: with a History of the Origin, Properties, and Uses of all Things Connected with Home Life and Comfort.

The book was an immediate best-seller, including in Australia where it crops up in many booksellers’ lists. It was followed by many more editions. Sadly, Isabella did not live to see many of them, dying in 1865 after the birth of her fourth child. Her husband subsequently sold the copyright to to publishers Ward, Lock and Tyler who did little to discourage the myth that Mrs Beeton’s cookery book was still issuing from the original author’s kitchen.

Over the years, much if not most of the original content disappeared as the publishers touted its improved and updated status. Among the improvements was, from around 1891, a section devoted to Australian cooking. This was expanded in following editions. In the 1908 version, the introduction to the Australian chapter read:

The Cookery in Australia is of course English in character, while in the hotels the French cuisine plays a prominent part just as it does here. The various dishes which are peculiar to the country are those obtained from animals and fruits indigenous to the soil, such as Kangaroo-tail Soup.

The Food Supply of Australia is excellent and abundant. In the towns the price of mutton varied from 3d. to 4d. per lb., and beef from 4d. to 6d. Up country it is cheaper, so cheap, indeed, that the skin is the more valuable part of the animal, and much of the meat is wasted or given to the dogs, the best parts alone being eaten.

Australian Fish is plentiful and good, and includes nearly all of the varieties esteemed in England except the sole, which is not found in any Australian waters; but there are many other varieties unknown in England, such as trumpeter, schnapper, flathead, barracouta, etc. Although the coast and rivers abound in fish, the supply in the market is not plentiful, consequently fish is very expensive, a fact which no doubt explains the excessive use of meat in a climate where a diet comprised almost entirely of such food is undesirable. Fresh water fish are most abundant in both creeks and rivers fresh water cod especially, a delicately-flavoured fish, generally considered superior to the cod fish found on our coasts. Oyster beds are abundant in many parts of Australia, consequently this highly-esteemed bivalve is too cheap to be considered a luxury as it is in England.

Vegetables grow abundantly in most parts of Australia, and in addition to the varieties common in England, there are many unknown to us. Sour sop, a fruit which in its ripe condition resembles the custard apple, may in its green state be cooked and served as a vegetable. Paw paw also serves the double purpose of fruit and vegetable, for it is equally excellent boiled while in a green unripe condition and served with white sauce, or eaten when ripe with wine and sugar. The choko is a vegetable little known, although it grows freely in many parts of Australia. It is excellent plainly boiled and served with white sauce.

Fruit is so plentiful in many parts of Australia that many varieties may there be had for the picking. In addition to apples, apricots, peaches, bananas, figs, melons and other well-known fruit, there are others almost unknown in England, such as gramma, granadilla, loquat, Passion fruit etc.

There followed a number of recipes for dishes including apricot jam, boiled choko, various fish dishes, parrot pie and three ways with kangaroo tail. “Melbourne Pancakes” were pancakes leavened with bicarbonate of soda and stacked, interleaved with mashed and sweetened ripe fruit.

This edition of Mrs Beeton’s also mentioned Australian beef and mutton but called for its use mainly in ‘made’ dishes like Beef Collops, Irish Stew and Potted Meat. Loftily, the writer declared that “large quantities of New Zealand and Australian mutton are now supplied to the London market. The finer qualities are but little inferior to those of home production.” 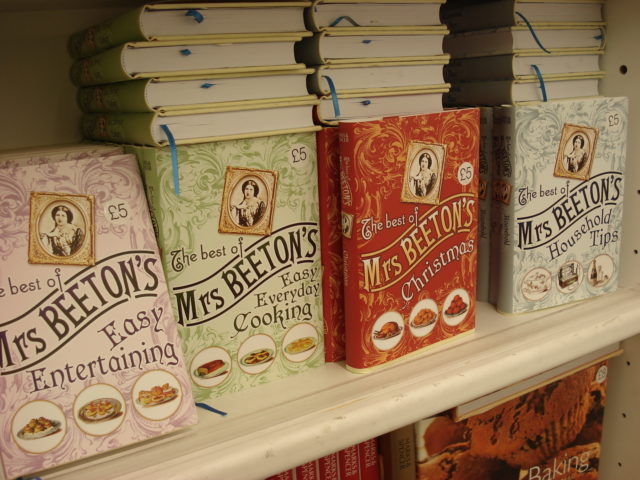