The Moira Lake Fishing Company (later known as the Murray River Fishing Company) was founded by Joseph Waldo Rice in 1855, fishing mainly for Murray cod. The company employed six European and several local Aboriginal fishermen. Initially, the fish were mostly sold in nearby communities, but once the railway reached Echuca fish could easily be sent to the goldfields and the Melbourne markets.

They’re not pretty. In fact, a large Murray Cod qualifies as a true monster of the deep. In 1857, the Melbourne Punch reported that ‘a Murray River cod has been caught weighing over 250 pounds’ (113kg) – justifiably describing it as ‘a whopper’. At least one historian has raised some doubts about a story relating a fish of this size, this time reputed to have been caught in the Barwon near Walgett in 1902. He feels it may be apocryphal.

Later in 1857, Punch illustrated a ‘monster from the Murray’ being delivered to the Victorian Club. Although the actual fish weighed in at a measly 80 pounds (around 37 kg) other papers also took up the story. 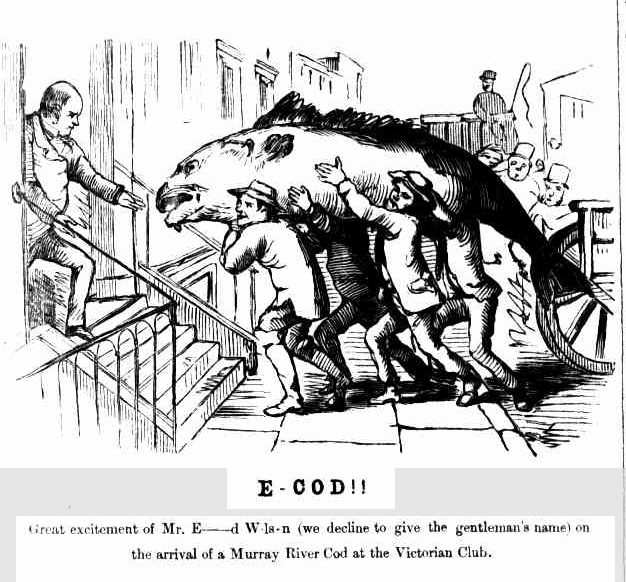 A cod fish, weighing upwards of eighty pounds, was received on Thursday night at the Victorian Club to which it was presented by Messrs. Macord and Parker, of .Sandhurst, Dr. Roche, the Coroner, defraying the cost of its transmission to this city. The monster arrived in excellent condition, and was placed on yesterday’s bill of fare as a gratuitous dish—a regular pièce de resistance-—a giant so bulky as almost to defy diminution by the assaults of the gastronomes. The quality of the fish was as unexceptionable as its quantity, its flavor resembling that of turbot, and it furnished fare to an immense number of’ the frequenters of the club.  (Gippsland Guardian 22 May 1857)

The Murray cod is Australia’s largest freshwater fish and one of the largest in the world. It plays an important part in local Aboriginal dreamtime stories and is attributed with the creation of the Murray River. There is evidence of Aboriginal people consuming the fish at least 25,000 years ago and when the colonists arrived they noted that it was a significant source of food for people living along the south-eastern rivers.  Aboriginal fishermen used many methods to snare the cod, including traps, dykes, nets and spearing from canoes.

The first white man to report seeing the Murray cod was the explorer George Evans, who observed them in the Fish and Macquarie Rivers, near the present site of Bathurst, in 1813.  Major Thomas Mitchell named, described and drew the species in 1831. The fish was greatly valued by early explorers, who commented on its abundance.

As early as the 1840s, there was a commercial trade in the Murray cod. The Adelaide Observer remarked in 1843 that:

Another catch of Murray cod was exposed for sale at Mr Edwards’s on Tuesday last. One of these fine fish weighed 63 lbs. We think it is a pity that some method is not adopted (by moveable placards or other wise) to let the Adelaideans know when such supplies are upon hand.

Mr Edwards was a butcher, who retailed the fish at from fourpence to sixpence a pound. A further article declared that the fish were being ‘caught in abundance and quantities brought in quite fresh for sale’. At this point, it seemed the fish were a sideline for station owners or station hands along the river.

The first commercial fishery, founded by Joseph Waldo Rice, was based at Moira Lake in the Barmah area of Victoria, around 35km from Echuca. Rice was an American, who arrived via the Californian and then Victorian goldfields. He was known as ‘Governor’ by the local aboriginal people.

The company netted fish in the lakes but soon expanded to cover more than 320km of the river, with catches increasing to between two and three thousand kilograms a week.  By 1863, some were already voicing concern about the sustainability of the fishery, with The Argus writing in 1863:

“The fishing operations of the company on Lake Moira are vigorously carried on, and their coach is regularly despatched twice a week with pretty heavy loads. Some steps should be taken for the protection of the fisheries, and the destruction of the fish at all seasons prevented. Already, we understand, they have become very scarce in this neighbourhood.”

Initially, fish was delivered to markets on the goldfields and in Melbourne by coach, and the company acquired a team of thirty horses and three coaches to transport the catch to the railhead at Bendigo.

The company to which we have referred was at first a co-operative body of working men, and has become well to-do through enterprise and industry. Even now, with all the, difficulty of sending fish down by coach and rail, regular customers are on the company’s books in Ballarat, and I am informed that as soon as the line is open to Echuca, Murray cod will be sold in Melbourne for 6d per lb, instead of 9d as it is as at present. (Ballarat Star June 1864) 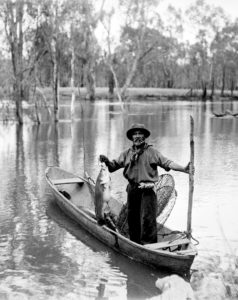 The company flourished, particularly when the extension of the railway line to Echuca opened in September 1864 allowing ready access to city markets.  By 1869, the company employed ten men as well as obtaining fish from other fishermen. The weekly catch was reported as between one and six tons (more than 6000kg). However, by the 1880s the fishery began to decline.

Acclimatisation enthusiasts made many attempts to introduce the Murray Cod into other waterways in Australia. Edward Wilson, editor of The Age and head of the Victorian Acclimatisation Society actively promoted its introduction into the Yarra River and its tributaries. There are now reports of Murray Cod up to a metre long being caught in the Yarra on Melbourne’s suburban fringe.

In the Murray Darling basin the population continued to decline as a result of over-fishing, toxic run-off from farms, depredation of young fish by introduced species and the installation of irrigation infrastructure. Despite government breeding programs and re-stocking, it’s unlikely that we’ll ever again share Charles Sturt’s vision of fish ‘rolling about on the surface of the water with a noise like porpoises’. (Journal of Charles Sturt, 1833)