No-one really knows the origin of neenish tarts, the bi-coloured pastries still widely available in Aussie cake shops. The first known mention of ‘nenish cakes’ is in an advertisement for the New South Wales Ice and Fresh Food Company in 1895. In 1901 a columnist calling herself “Housewife” published a recipe in The Sydney Mail and New South Wales Advertiser. The recipe was evidently new, as she remarked that she hadn’t had time to test it.

There is a persistent legend around the invention of neenish tarts, involving one Ruby Neenish in the NSW town of Grong Grong. The story has it that she ran out of chocolate icing when preparing tarts for a kitchen tea, so used half chocolate and half white icing. These accounts, however, usually give a date of 1913 – clearly disqualifying the mythical Mrs Neenish as the inventor. In 2016, ABC journalist Rachel Carbonell tracked down the source of the story: it turns out to be a joke played by a former Grong Grong resident on one of his journalist friends back in 1988. The internet being what it is, the legend has since been widely circulated as fact.

The two-tone icing of a neenish tart is replicated in a cookie native to New York. At first glance, black and white cookies look just the same, but instead of cream-filled tarts they are just cake-like cookies with half chocolate, half vanilla icing.

It seems that neenish tarts (or nenish cakes) were available from commercial  bakeries by the turn of the century, but not yet commonly made by home cooks. When “Housewife” published the recipe, she was responding to an enquiry from a reader identified as “Obadiah”. Her reply read:

I am glad to be able to send you the recipe for which you were so anxious. Very few directions, however, were forwarded me, and as I have no time at present to give the recipe a trial, I am afraid that in some of the details you will have to use your own judgment. I should try with only a quarter of the ingredients, so if your efforts the first time were not successful there would be but little waste.

Neenish Tarts : For the shell take 1 lb. ground almonds, ¾ lb. icing sugar, four whites eggs beaten to a froth, one handful flour ; mix these into a stiff paste. Have ready some plain patty pans about the size of a large teacup in circumference and 1 ½ in. in height. Butter them lightly, and with your fingers press in sufficient quantity of the paste to line the tins, taking care that the sides and bottom are quite even and about ½  in. thick. Place in a moderate oven and bake until the tarts are firm and of a pale brown. The details for the frilling [sic] are also rather vague. Take a little fresh butter and mix with it some thick sweet custard. On the top of the whole put the thinnest layer of icing made with white of egg and icing sugar, one half to be coloured with strong coffee. I shall be quite anxious to hear how you succeed. Will you let me know.’

Unlike later recipes, the key features of this version of Neenish tarts were a thick almond base and a custard, not a cream filling. The icing was coloured with coffee, not with chocolate. Over the next few years, the recipe reappeared with more detail on how to achieve the bi-coloured icing. A recipe in Launceston’s Daily Telegraph in 1903 suggested a yellow and brown combination:

On the top of this [filling] spread a layer of icing, made with white of egg and icing sugar. For the coloured half, have ready some rather thin coffee icing. Take the tart in the left hand, dip a knife in the coffee icing, and as quickly as possible lay the knife half way across the tart, and pull it rapidly backwards towards the right. If this is done quickly, the coffee icing will go on with a straight line right across the centre of the white icing, and there will be none spilt during the process.

Neenish tarts and the A. B. C. Tea Rooms

“Housewife” made no comment in 1901 about the origins of her neenish tarts recipe. However,  a column she wrote for the same newspaper 26 years later revealed that she obtained it from a “member of the firm” of A. B. C. Company.

The Aerated Bread Company was founded in England in 1862 by Dr John Dauglish, who invented a way of causing bread to rise without yeast. From 1864, the company operated a chain of tea rooms, the A. B. C. Tea Rooms – an operation that extended to Australia. In Sydney, A. B. C. became a leading catering company, operating bakeries, a ballroom and tea shops.

Neenish tarts didn’t feature on the UK menu, but “Housewife” emphasises the authenticity of her recipe.  She mentions that she concurrently obtained recipes for Othellos and Desdemonas. These little biscuits represent a further variation on the two-tone theme, featuring brown icing (Othellos) and white icing (Desdemonas).

Over the years, the recipe for neenish tarts has gradually changed and exotic variations have been introduced. By 1929, a pink and white icing combination was an option, while the brown icing was chocolate rather than coffee-flavoured. The custard filling had been replaced by a mix of cream, milk, gelatine, sugar and vanilla essence.

By 1953, the pink and brown colour combination had made an appearance in recipes. In 1956 a Women’s Weekly recipe dispensed with almonds in the crust altogether and specified a filling of cake crumbs, egg yolk, condensed milk and flavourings. In 1963, in a travesty of the original recipe, Pineapple Neenish Tarts featured in the Weekly’s “Ten Menus for the Modern Hostess” by Leila Howard. 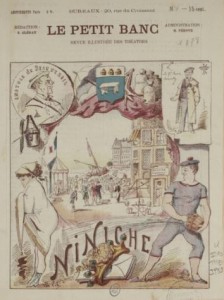 All this, however, fails to shed light on the origin of the name “neenish”. The recipe has been found in some cook books (including one from the CWA) spelled “nienich”.  Are there German origins? Did the A.B.C. employ a continental pastry cook? Does the name derive from a Hungarian surname? Another theory that has been advanced is that it’s an anglicised version of Niniche – the title of a naughty French musical play (vaudeville-operétte) that was first performed in Paris in 1878. The play was originally banned in England, to the prim satisfaction of the reporter for The Sydney Mail. If we have Othellos and Desdemonas named after the Shakespearean characters, is the name neenish another theatrical allusion?

So far, no one can say for sure.