According to legend, Hans Irvine, then owner of Great Western wines, heard that Dame Nellie Melba had expressed the wish to bathe in champagne. He commanded that a bathtub be brought to the winery and filled with 152 bottles of his sparkling wine – known in those pre-D.O.C. days as champagne. The diva bathed behind a screen. Cellar-hands later bottled the bubbly and claimed that, although 152 bottles went in, 153 bottles came out. In 1910, one of the underground drives at Great Western was named after Melba. Seppelts bought Great Western in 1918. 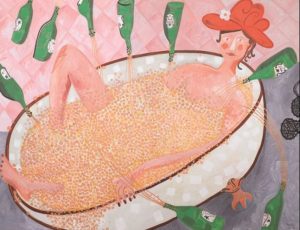 Dame Nellie Melba, was a renowned Australian opera singer (1861 – 1931) and became one of the most famous singers of the late Victorian Era and early 20th century. Melba was the first Australian to achieve international recognition as a classical musician. She took her name from her birthplace, Melbourne, and performed in opera houses and before royalty in Europe and America.

In Australia, Melba enjoyed the adulation of virtually the entire population. She had dishes named after her – Peach Melba and Melba Toast.  Her lengthy series of farewell performances, stretching over four years or so, led to a distinctive Australianism: “more farewells than Nellie Melba”.

Although the event does not seem to be recorded in any newspaper, it seems likely that the diva’s visit to Great Western occurred when she spent six months living near Burrumbeet, close to Ballarat in Western Victoria. Melba arrived in the area in 1907 with a retinue of sixteen servants including two French cooks and entertained herself by taking drives through the surrounding country in her motor car.

Melba’s famous champagne bath was depicted by noted Melbourne artist, Mark Schaller in this oil painting. It was, at least at some point, on display at the Australian High Commission in Singapore.