When Nescafé launched in Australia, it began the conversion of Australians from tea-drinkers to coffee drinkers. Coffee was associated with the new American-style glamour, tea with English conservatism, and instant coffee made coffee drinking convenient.  A 2010  report  indicated that instant coffee still accounted  for about 80 per cent of all coffee consumed in the home.Prior to the arrival of instant coffee in powdered form, Australians who wanted a quick and convenient cup of coffee would have used coffee essence, an intensely flavoured liquid which often contained chicory.

Nescafé was released by Nestlé in Switzerland in 1938. It was developed over several years as an answer to the over-production of coffee in South America. Because of its keeping qualities and convenience, it became a part of American military ration packs, helping to popularise the brand (and the concept of instant coffee) during the 1940s.

Although some Nescafé was imported into Australia from the late 1930s, it was in 1947 that Nestlé began to manufacture it here at a factory in Dennington, Victoria. In 1986 production moved to the Nestlé factory at Gympie in Queensland.

When the product was launched in Australia, the marketing stressed its economy and convenience. Realising that the concept was unfamiliar to Australians, advertisements gave detailed instructions on how to make a cup of coffee – instructions that sound ludicrous to us today. 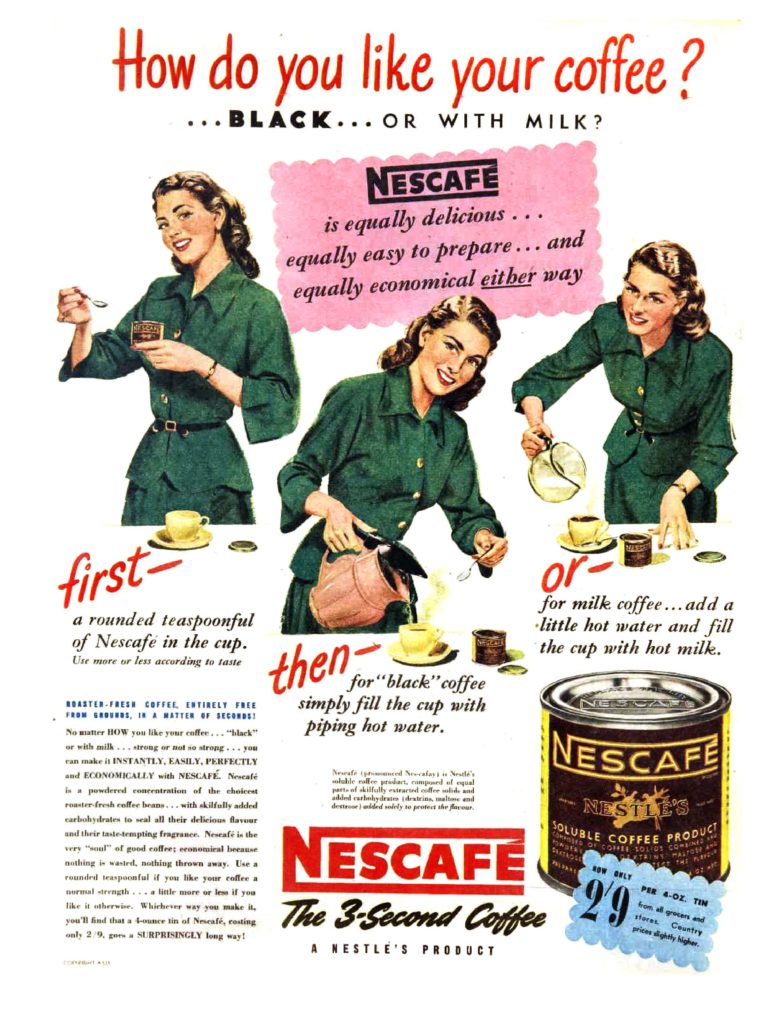 Other brands followed. In the mid-1950s, Bushells ordered six instant coffee machines from America for its new factory in Concord, Sydney. In 1960, the first jars of Moccona arrived from Europe. In the early 1960s, Maxwell House became a household name with an Australian version of an American commercial, when a distraught husband wails “Out of coffee!”

Despite the growing popularity of espresso coffee in coffee lounges and cafes across Australia, developing into a full blown coffee culture from the 1980s, instant coffee continued to be popular. In 2013, Nestlé claimed that Australians were drinking more than 3.6 billion cups of Nescafé instant coffee every year.