As we entered the second decade of the 21st century, the latest “in” cuisines were Korean, Mexican, South American (BBQ) and Scandinavian (thank you noma). Or, if you believed Matt Preston, the new cuisines were Spanish, Latin American and Japanese. Of course, examples of most these so-called new cuisines had been around for decades.

The 1950s saw our first Japanese restaurant, the Sukiyaki Room, as an annexe to another Sydney restaurant. As late as 1980, though, the first Age Good Food Guide felt it had to explain to punters what sushi was and warn people about the likelihood of encountering (gasp) raw fish. The first wave of Mexican restaurants appeared with Taco Bill‘s in the late 1960s. 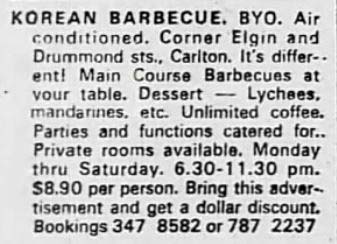 In 1971, the census showed fewer than 500 Korean people living in Australia. At that time, Korean was certainly not one of the new cuisines making waves. The first Korean restaurant, according to the Sydney Morning Herald, was Korean House, opened in 1975 in William Street by accountant Myongho Pak. In Melbourne, the Korean Barbecue, a hot-pot style restaurant (long vanished), was also operating by 1975, perhaps before Mr Pak’s establishment. Today, Strathfield in Sydney has the highest concentration of Korean-run food outlets in the country.

Spanish cuisine goes back a little further.  The first Spanish immigrants to Australia were, in fact, sheep. Spanish Merinos, imported by John Macarthur in 1797, provided the foundation of our wool industry. The gold rush attracted Spanish immigrants of the human variety and the first Spanish restaurant was opened in Melbourne in 1860, despite there being fewer than 150 Spaniards in Victoria. By 1947, this figure had grown to only 252. Even in 2011, there were only 13 057 Spanish-born people in Australia.  For many years Johnston Street, Fitzroy, was the hub of Melbourne’s Spanish community with a number of restaurants and clubs.  However, as the tapas craze arrived, Spanish-style cuisine began to take off across Australia.

The Latin and South American trend also had a precedent. In 1980, the Sydney Morning Herald reported that Sydney had at least six South American restaurants. Among them were El Pato in Kent Street, Pampa’s in Northbridge and Vina del Mar in Haberfield. Empanadas seemed to be the universal offering, but El Pato’s menu included a very Argentinian dish of mixed offal presented on a mini grill and kept hot at the table with burning coals.  In the early ’80s, Melbourne had Enri’s in Richmond (Argentinian).

With its emphasis on meat, South American food was not exactly on trend over the following two decades. Its re-emergence in the 2010s, often involving barbecue over an open flame, represented a push back against the healthy eating dogma that characterised the 1980s and 1990s.