The dessert we know as Pavlova was inspired by Russian ballerina Anna Pavlova and both New Zealand and Australia claim to have invented it. However, new research has uncovered more than 150 similar, earlier recipes in Europe and America.  In 1935, Herbert Sachse at the Esplanade Hotel in Perth created the Australian version, which was virtually identical to an earlier New Zealand recipe.

The two people who can justifiably claim to be the world experts on the subject are New Zealander Dr Andrew Paul Wood and Australian Ms Annabelle Utrecht. They have spent nearly two years researching for a book and possible documentary about the origins of the dish, in a collaboration called The Doc and the Frock.

Wood and Utrecht have pronounced that the format of the dessert (meringue topped with cream and fruit) was not invented in Australia or New Zealand, but probably had its origins in Austria, making its way to America where a recipe even appeared on packets of cornstarch. But it wasn’t called Pavlova. The New Zealanders can perhaps claim credit for uniting the cake with its name, as a ‘Pavlova Cake’ recipe appeared in N.Z Dairy Exporter Annual in October 1929. Sachse’s only claim to fame, then, is dropping the word ‘cake’. 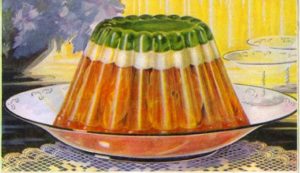 The first dessert simply known as ‘Pavlova’ however, wasn’t a meringue based confection at all. It was a layered jelly that appeared in a gelatin manufacturer’s recipe book Davis Dainty Dishes in 1926.  There are many earlier recipes using the name, including Strawberries Pavlova, a frozen dessert discovered in a New Zealand publication from 1911.