1998 Nigella Lawson publishes How to Eat

If Jamie Oliver was all about energy, Nigella Lawson was all about sensuality. Her first book, How to Eat, had the tone of a one-on-one conversation and when she made her TV debut in 1999 male viewers, in particular, were immediately hooked. She became a culinary superstar, each program ending with a late night raid on the fridge and lots of finger licking.

Nigella Lawson is an English food writer and television cook. Initially a writer with a number of English newspapers, her assignments included social affairs, literary reviews,  restaurant reviews and food columns. She became the deputy literary editor of The Sunday Times in 1986 at the age of 26.

How to Eat , subtitled The Pleasures and Principles of Good Food, was Nigella’s first book and sold more than 300,000 copies in the UK alone. It was followed in 2000 by How to be a Domestic Goddess.  My most-cooked recipe from How to Eat is Nigella’s Pea Risotto (page 156). It’s a recipe that serves two, and comes with the usual chatty introduction about which peas to use (frozen are better) and which stock to choose (ham for Nigella, but you can use pretty much anything including granules). 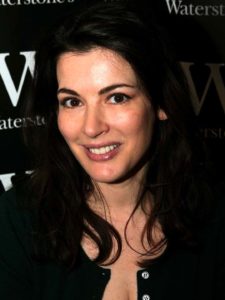 The first Nigella Lawson television series, Nigella Bites, went to air in the UK in 1999. It aired first in Australia in May 2001. In an article in The Sydney Morning Herald, Terry Durack introduced her to readers as “The Thinking Man’s Crumpet”.

“Nigella Lawson is not so much a cook and food writer as a powerful, over-the-counter, mind-bending, addictive substance,” he wrote. “Beautiful, fashionable, wealthy and intelligent, she does for men what Jamie Oliver does for women – and I don’t mean give them recipe ideas.”

The series was broadcast in Australia on the ABC and promoted as “Fuss-free delicious cooking with UK food writer Nigella Lawson. One reviewer wrote:

Real food for real people? Food that “brings us together with our memories”?  Lawson doesn’t regard herself as a chef. “My qualification is, ” she insists, “as an eater..I have nothing to declare but my greed.” I don’t believe her. The contradictions between untidiness and elegance are too jarring. Is she just another clever foodie trying to sell a million recipe books?

If that was the case, she certainly succeeded. With her achievements including twelve books, thirteen TV series and two stints as guest judge on Australian MasterChef, Nigella is a cultural phenomenon as well known in this country as in her native England.