The 1956  Olympic Games  changed the restaurant scene in Melbourne. Despite an initial suggestion that shearers’ cooks should introduce visiting athletes to true Aussie tucker, (see Charmaine O’Brien’s Flavours of Melbourne ), the Olympic Committee recruited international chefs to work at the Olympic Village. Many stayed to open restaurants. Perhaps the most renowned was Hermann Schneider, who went on to open Melbourne’s Two Faces restaurant.

In an exercise dubbed ‘Operation Cooks’, hotelier Tom Carlyon was despatched to Europe in early 1956. He was the brother of the Chairman of the Olympic housing and catering committee, Norman Carlyon, and his mission was to recruit chefs. It was announced that he would interview cooks in  England, Italy, Germany, Switzerland; Holland, Denmark, Sweden, Austria, France, and Greece. They were to be brought to Australia under the assisted immigration scheme, with the hope that many would become permanent residents.

Menu planning was already underway, with the intention to include kangaroo tail soup, prawn fritters, curry, grilled chicken and “hundreds of other national dishes” in meals for 23 distinct dietetic groups. There was even special catering planned for national feast days, with American competitors enjoying turkey, cranberry sauce and pumpkin pie on Thanksgiving, which fell during the Games.

Athletes were to dine in national groups according to eating habits: East Asian, Middle East, Israeli, British-American, French-Belgian, Hungarian, Italian, Mid-European, Russian and Eastern European, Scandinavian and Spanish-American. (There was no mention of teams from Africa.)

The Olympic village had 10 kitchens and 20 dining rooms and was estimated to require around two tons of meat and three tons of vegetables daily. Organisers were somewhat flummoxed by the thought that Russians might like soup for breakfast, but the problem was solved when the Russian team brought their own chefs.

Of course, it wasn’t just the athletes who needed to eat. Melbourne restaurants would need to feed the influx of Olympic visitors. The Australian Women’s Weekly was pleased to report that the city had ‘turned Continental’ and could provide dishes for gourmets of many nations. Their reporter waxed lyrical about the Rainbow Room at the Savoy Plaza Hotel. She said nothing about the food, but gushed over the decor and the glass dance floor, the only one of its kind in the Southern Hemisphere:

Of plate-glass squares, one inch thick and lit from underneath, the floor is backed by a tall plastic screen and given a rainbow effect by hidden revolving discs of bright colours. The turn of a switch brings water cascading between coloured lights and screens…” 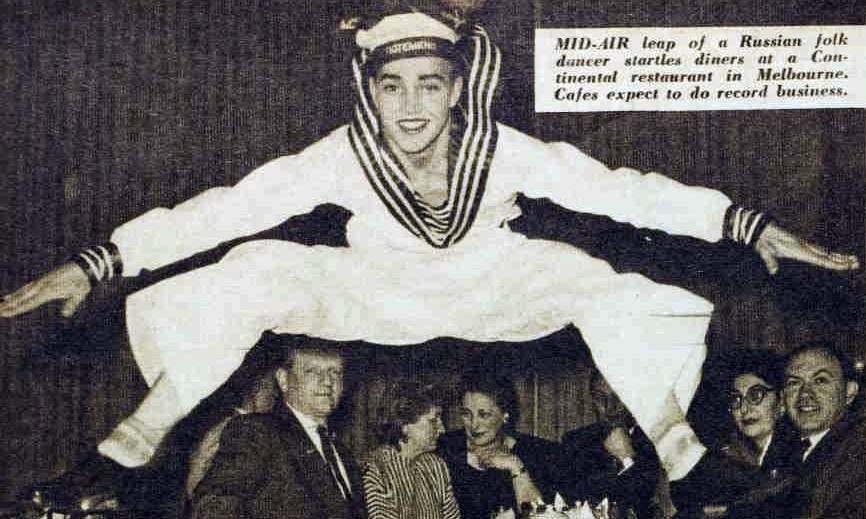 Ms Frizell also expressed her enthusiasm for Antonio’s, where a duckling impaled on a silver sword was set alight, presumably at the table. Then there was the Russian dine-and-dance venue, the Troika, with balalaika music, Kievski Cutlets, checked tablecloths and bouncing Russian dancers.  You could also enjoy a curry at the Ceylon Room, as long as you didn’t mind drinking tea. At Jimmy Watson’s, by contrast, you could purchase a long-stemmed glass of Madeira for threepence, as long as you didn’t mind bringing your own food.

There’s no doubt that Australia’s culinary landscape changed after the Melbourne Olympics, but the change took time. Many of the chefs recruited for the Games stayed on, but fine dining (especially if you wanted to accompany it with a glass of wine) was still largely restricted to the grand hotels (with or without rainbow dance floors). Even Schneider had to work in an army club and at Victoria Golf Club before snaring a spot at Antonio’s. In 1960 he opened Two Faces – and never looked back.