The Oslo lunch, invented by the Norwegian Professor Schiotz, had been associated with improved child health and weight gain in Norway and Britain. When the Oslo lunch was introduced in some Victorian schools, children who ate this combination of a cheese and salad sandwich on whole meal bread, accompanied by milk and fruit, were shown to be healthier after six months.

In these days of childhood obesity, it’s odd to consider that the success of the Oslo lunch was measured in terms of children’s weight gain. But we need to remember that it was originally designed as a special health meal for under-nourished children. The meal was introduced in 1932 and improved the health of a group of Norwegian children so much that it was served in all Norwegian schools before the war.

By 1938 it was being served to school children in London and hailed as a success when children who had the meal regularly gained 40-100 per cent more in weight and height than children on ordinary lunches. In 1941, nutrition experts in Melbourne experimented with children at the Opportunity Youth Clubs in Melbourne. These were charitable clubs formed to offer activities to “children from working class suburbs”. 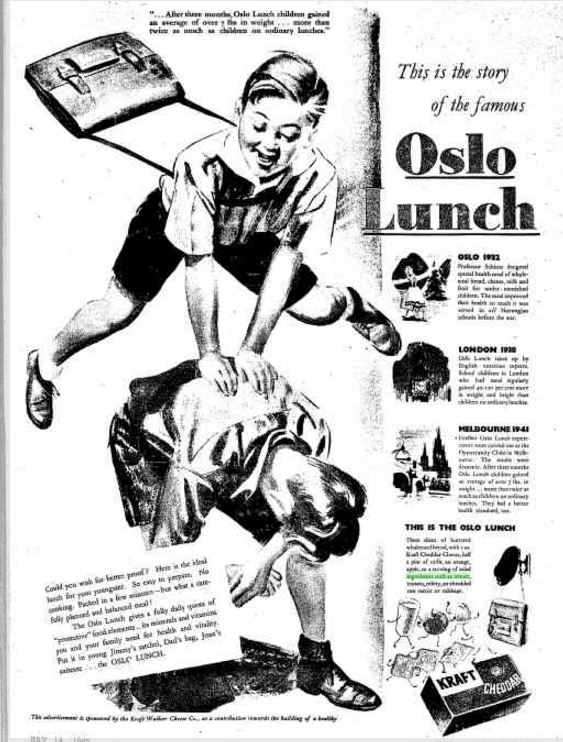 After three months Oslo Lunch children gained an average of over 7 lbs. in weight… more than twice as much as children on ordinary lunches.

Soon the cheese manufacturer Kraft was promoting the Oslo Lunch. According to their advertisements it consisted of:

Three slices of buttered wholemeal bread, with 1 oz. Kraft Cheddar Cheese, half a pint of milk, an orange, apple, or a serving of salad ingredients such as lettuce, tomato, celery, or shredded raw carrot or cabbage.

The copy in this 1945 advertisement reads:

Could you wish for better proof?  Here is the ideal lunch for your youngster. So easy to prepare. No cooking. Packed in a few minutes – but what a carefully planned and balanced meal!