After the ceremony, the official party, including the Duke and Duchess of York, lunched on  turtle soup, poached schnapper, fillets of beef, roast chicken and ham, straw potatoes, green peas, Canberra pudding, fruit ices, coffee and cheese.  Provision had been made for the public, but the crowd was smaller than anticipated. As a result, more than 10,000 Sargents meat pies, as well as sausage rolls, prawns and fish were buried at the Queanbeyan tip.

The official opening of the new Parliament House (now known as Old Parliament House) took place on 9 May 1927. The Duke and Duchess of York, later King George V and Queen Elizabeth, performed the honours. According to many contemporary accounts, it was something of a debacle, with many important people including  Alfred Deakin and Canberra’s “father”,  King O’Malley all but overlooked.

The Labor Daily reported: “The catering cost, as might be expected, an enormous sum, but, singularly enough many of the invited guests were practically starved. When people of importance in the community had to go hungry on the opening day on a bun and a cup of chocolate, when masses of choice viands were available for the all-important public servants, there seems to have been something wrong.” No alcohol was served at the opening, as the Australian Capital Territory was a “dry” area. 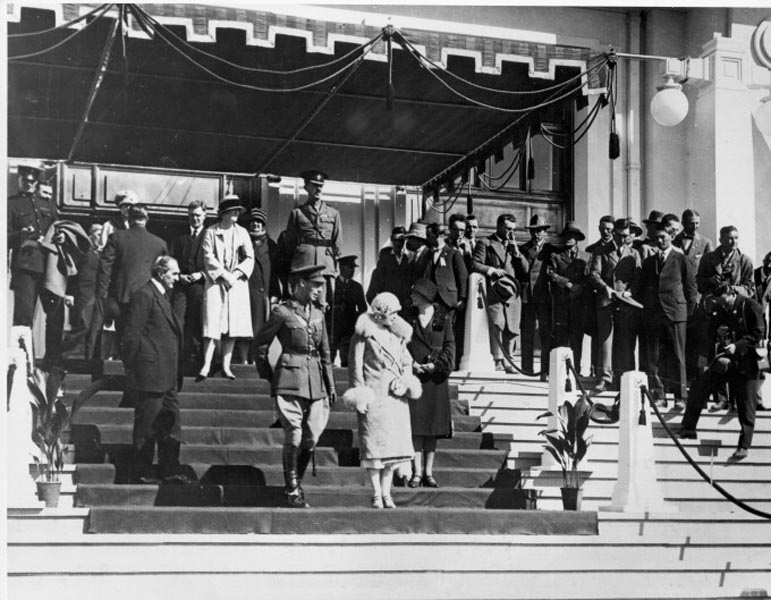 Because of the shortage of accommodation in the emerging capital, vast camping grounds had been set up for visitors. However, the crowd was smaller than expected. As a result, much of the food ordered for the public had to be disposed of. There’s some dispute about where the food was interred. Some reports nominate the Queanbeyan Tip, while others say it was buried on the site of today’s Treasury building. In which case, we can say that the meat pie is the foundation of our economy.

A hastily convened reception in King’s Hall in the evening provided “a light supper” for the representatives of other Dominions of the Empire (ie Canada, New Zealand, South Africa and India). These dignitaries, who had hoped to convey their good wishes at the opening ceremony, had to make do with saying a few words while others chattered in the background.

It seems that guests at the opening helped themselves, not only to food but to cutlery, plates, glasses, bed linen (including four quilts), dishcloths and towels from Parliament House and Canberra hotels.

In 2007 the ABC published a recipe for Canberra Pudding, contributed by a listener, Lorna Fazldean, who said her grandmother used to make it.

Mix together a cup and a half of flour and the teaspoon of baking power.
Rub in 2 tablespoons of dripping and a pinch of salt.
Add half a cup of currants and enough water or milk to make a soft dough.
Roll out the dough on a floured board in a rectangular shape.
Spread a layer of jam over the dough.
Sprinkle a handful of sultanas over the dough/jam.
Roll up the dough and place it in a baking dish.
Mix a cup and a half of water with three quarters of a cup of brown sugar and then pour over the rolled up dough.
Bake in a moderate oven until brown.