Spencer Cottee , a dairy farmer from Lismore NSW developed Passiona cordial which, when carbonated, became the foundation product of the Cottee’s range. Passiona was first manufactured in 1924 and described in an address to the Mullumbimby Chamber of Commerce in 1925.

Spencer Cottee developed his Passiona fruit syrup as a way to use the passionfruit grown on his farm. He became an enthusiastic promoter of the product as a money-earner for local farmers. He distributed his syrup to cafes and refreshment rooms as well as sending samples to Government House and the American Consulate. His claims for its healthy qualities may have become a little over-enthusiastic:

. ‘A new fruit drink – known as Passiona – has been placed on the market.… Made from passionfruit grown locally….fruit eating – and may I add fruit drinking – is a necessity, not a luxury, and that it is the only certain way of staying the rapidly increasing plague of cancer…

Initially, the syrup was distributed around Lismore in northern New South Wales, where a local bottler, Bryants, distributed an aerated version. However, in 1926 Cottee set up a factory in Sydney. 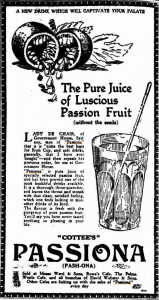 He had vice-regal patronage. An advertisement in 1927 quoted Lady de Chair, wife of the Governor of New South Wales. The advertisement read:

LADY DE CHAIR, of Government House, Sydney, says of “Passiona” that it is “quite the best basis for Fruit Cup, and soft drinks, generally, that I have ever bought”-and then repeats her previous order, for use at Government House.

“Passiona” is pure juice of specially selected passion fruit,and has been proved one of the most healthful drinks available.It is a thorough thirst-quencher,and leaves the throat and mouth with that clean, satisfied feeling, which one finds lacking in most other drinks of its kind.

The flavour is fresh with the pungency of pure passion fruit..You’ll say you have never tasted anything so pleasing in your life.

Note the recommended pronunciation at the foot of the advertisement: PASH-ONA.

Cottee granted licences to a range of bottlers throughout Australia, including Geo. Hall & Sons in South Australia and Bowral Bottlers in the NSW Southern Highlands. Newspaper reports in the 1930s talk about Australians taking it with them to Canada and even Jerusalem. In 1934, Cottees Passiona Ltd reported a gross profit of £609.

In 1951, Passiona Bottling Co. Sydney was formed “to acquire from Cottees Passiona Ltd. the rights to aerate the bottling syrups, fruit juices and other concentrates”. The Passiona we know and love was born.

It seems to have been a favourite of Labor Prime Minister Gough Whitlam, as John Faulkner mentioned in his tribute to Gough when announcing his death to the Labor Caucus on 21 October 2014:

10:31am: Senator Faulkner says “for more years than I care to remember, every week I would have a cup of tea or a glass of passiona” with Mr Whitlam.