It seems the dairy industry objected to the word “butter” being used for anything other than the dairy product. In response, legislation was passed requiring peanut butter to be called “Peanut Paste”. South Australia and Western Australia introduced a similar requirement, but in New South Wales, Victoria and Tasmania “Peanut Butter” remained in use.

I haven’t been able to track down the legislation itself (though I’m working on it). However, Eta Peanut Butter was still being advertised by Foreman’s Grocers in Rockhampton in April 1929. And a newspaper article in April 1930 refers to the fact that ‘there is no peanut butter in 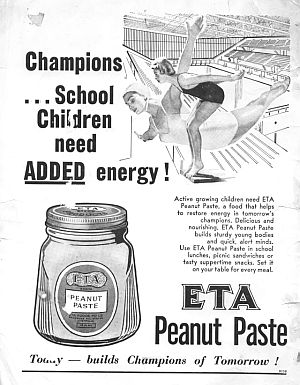 Queensland now – it is peanut “paste”’. The article suggests that the change resulted from action taken by the Department of Agriculture. So it seems it happened either late in 1929 or early in 1930.

The Macquarie Dictionary’s project to identify regionalisms in Australian English provoked many comments from contributors from both sides of the peanut butter/paste divide.  They commonly told tales of receiving blank looks after moving interstate and asking for “peanut paste”. Some stick to the “paste” term with almost religious fervour, claiming that “peanut butter” is an Americanism and should therefore be shunned.

This argument is spurious. In fact, our own Aussie Sanitarium company was among the first companies in the world to produce peanut butter commercially. And it was known by that name well into the 20th century, presumably until the powerful dairy lobby started objecting.

Peanut butter wasn’t the only product the dairy farmers targeted. They also objected to Copha, made from coconut oil, and originally called coco butter. And then there was margarine which, for many years, could not be coloured yellow thanks to dairy industry pressure. At least we didn’t go as far as New Zealand, where the sale of margarine was totally banned from 1908 to 1974 – unless you had a doctor’s prescription.

It’s unclear whether the peanut butter laws were repealed or whether they just stopped being enforced. They had certainly caused pain to manufacturers, who had to produce alternative packaging for the “paste” states. Many people still refer to “peanut paste” in those states, although it seems that from about the 1950s peanut butter started to become more accepted nationwide.