Phylloxera, an aphid-like root louse that destroys grapevines, devastated up to 70% of Europe’s vineyards at the end of the 19th century. It first appeared in Australia at Geelong in 1877. It spread north, being detected in New South Wales in 1884 and Queensland in 1910, destroying vineyards and devastating the industry.  South Australia, having banned movement of vine material in 1874, remained free of the pest. Western Australia and Tasmania also escaped infection.

The Phylloxera bug originated in America where the roots of the local vines (Vitis labrusca) were resistant to its predations. When cuttings were taken to Europe in the mid-19th century, the bug hitched a ride and soon attacked the vulnerable vitis vinifera vines. It is estimated that more than 6 million acres of vines were destroyed in France, and phylloxera soon spread to the rest of Europe, South Africa, Australia and New Zealand. It even caused destruction in California, where growers had imported vinis vinifera vines rather than use local varieties. 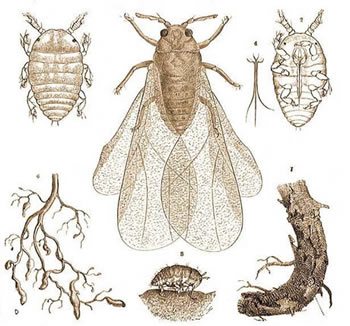 In Australia the bug spread north from Geelong to wine-growing areas in north-east Victoria and then to other states. Worldwide, vineyards in the affected areas were uprooted and vineyards were replanted with vines grafted onto resistant American rootstocks. Fortunately, Tasmania, South Australia, Western Australia and the Northern Territory remained phylloxera free. As a result, South Australia now how some of the oldest vines in the world, growing on their original European rootstocks. Strict quarantine regulations restrict the movement of vine material between regions in an effort to protect these old vines.

Phylloxera infestation cannot be successfully cured; replanting is the only option and is expensive. In 2017 Vinehealth Australia calculated the cost at $60,000 per hectare. The pest has not been eradicated and there are still several areas of Australia declared as Phylloxera Infested Zones – most notably large sections of Victoria’s Yarra Valley, where it was discovered in 2005.

Despite this, many growers continue to resist planting vines grafted onto resistant root stocks.