The quintessentially South Australian pie floater was reputedly invented by a Port Pirie baker known as Ern ‘Shorty’ Bradley. It consists of an upside-down pie in a bowl of pea soup, topped with tomato sauce. It is eaten with a spoon. Sometimes the tomato sauce is replaced with vinegar or Worcestershire sauce.

The culinary heritage of the pie floater probably comes from northern England where pea and pie suppers are a traditional form of entertainment. The term ‘floater’ is also used in parts of England, where dumplings for soup are described as floaters or sinkers. It’s not clear how this term came to be applied to the pie and soup combination. 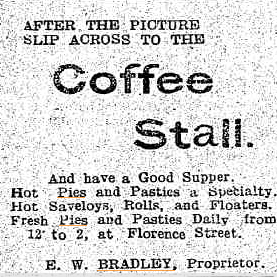 Ern Bradley operated a bakery in Port Pirie. Although legend has it that he invented the pie floater in the 1890s, the first printed record seems to be from 1914,  when he advertised his evening coffee stall in the Port Pirie Recorder. His cart was positioned near the Casino cinema, and Bradley invited patrons to “slip across to the Coffee stall and have Good Supper”.  He offered “Hot Pies and Pasties and a Specialty. Hot Saveloys, Rolls and Floaters.

The Floater became a popular dish at the many pie carts that operated in Adelaide in the late 19th and early 20th century. The first pie cart is thought to have been operating by 1860 outside the Adelaide Post Office. By the turn of the century, there were 13 carts dotted around the city. However from the late 1930s, as the operators ceased trading, the Adelaide City Council refused to re-issue licenses and by 1958 only two remained. The last pie cart, outside Adelaide’s Central Station,  was closed in 2010, but the pie floater is available through bakeries, including several 24-hour establishments, so late-night revellers can get their floater fix .