Hugh Plaistowe was born in London where he worked in his father’s confectionery business. In 1895, in partnership with a Mr. J. Hobbs, he began making confectionery in Perth. The factory in West Perth began operations in 1915. Among their products was the famous Choo Choo Bar, now revived by Lagoon Confectioners.

Plaistowe expanded their operations beyond confectionery and, from the early days, had a very active research and development operation. In 1919, because of the difficulty in obtaining essential oils and flavourings, they began to extract these from locally available material.

This opened up new business opportunities beyond the food sector and subsequently a new division, called Plaimar, was established. This division ventured into perfumes, distilling sandalwood oil, boronia otto, oil of lemon and peppermint from locally grown plants. 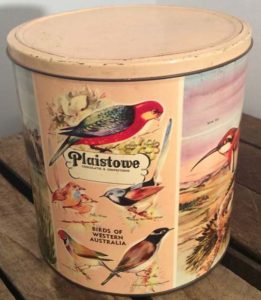 In 1928 Plaistowe developed a process for producing tomato concentrate, which was successfully exported to the UK and to the eastern states. The company also obtained a licence for the UK brand Fulcreem. Under this brand they made custard powder, Don jellies, lemon juice cordial, cakes and other goods.

An article published in 1930 recorded that Plaistowe and Co. Ltd. manufactured over 400 different confections including “chocolates, milk chocolates, and sugar confections, triple blend cocoa, icing sugar, lemon and orange peel”. They were also among the early manufacturers of nonpareils, also known as hundred and thousands – an essential component of that great Australia favourite, fairy bread.

Plaistowe was acquired by Nestlé in the early 1990s. The brand is now applied only to cooking chocolate products and cocoa.