As part of a campaign to promote fruit sales, Victorian Railways Commissioner Harold Clapp had a bakery built to produce raisin bread. The intention was to assist fruit growers and increase the railways’ freight business. Although raisin bread wasn’t completely new, few bakers were producing it in Victoria at that time. Raisin bread was promoted on railway posters.

The initiative was reported in the interstate press, with The Mail, Adelaide, running the following story in June 1923 :

VICTORIAN RAILWAYS.
GIVE INDUSTRY A LIFT.

MELBOURNE, To-dav. Mr. Clapp … will shortly take another step forward in his campaign to foster local industries. A building for the manufacture of raisin bread in Dudley Street, West Melbourne, has just been completed, and the work of tiling the interior is in progress. At the back of the Railway Commissioner’s breadmaking scheme is an ambition to help the dry fruits industry and incidentally to increase the railway goods traffic from northern Victoria to the seaboard.    Mr. Clapp believes that once the people have tasted raisin bread as the railways will manufacture it…they will have no other. 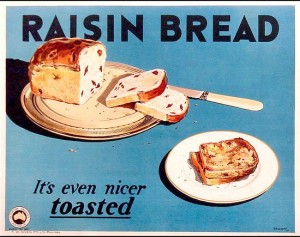 In an address to the Australian Dried Fruits Association annual conference in 1925, Mr Clapp admitted that it was a selfish interest, and yet a “fully mutual interest”. At that point, the railways were selling 20,000 loaves a month. These were “hygienically wrapped”, the first wrapped bread to be sold in Australia.

When the railways introduced the raisin bread, only three bakers in Victoria were making it. According to Clapp, only one of these was turning out a satisfactory product.  By 1925, about 115 bakers were distributing it. The railways formula required 7 lbs. of raisins to 14 lbs. of flour. Their consumption of fruit was about 5,000 lbs. of raisins and 1,000 lbs. of sultanas weekly.

The bakery went on to produce a range of other products including fruit pies, cakes and other “wholesome goods”.