The Aussie-owned fast food chain began in Western Australia.  Originally a family business, Red Rooster was acquired, and the chain expanded, by Coles Myer. Along with two other chicken brands it is now owned by Hong Kong based company PAG Asia Capital via its investment in the company Craveable Brands.

The founder of Red Rooster, Peter Kailis, was the eldest of of four sons of Greek migrant George Kallis, who had opened a fish shop in Perth in 1926. With nine partners, he invested in an existing chicken shop in the Perth suburb of Kelmscott to open the first Red Rooster  store. In the early years the business struggled financially, but Kailis eventually bought out the other partners to become sole proprietor. Red Rooster soon expanded to four stores on the strength of word-of-mouth recommendations. 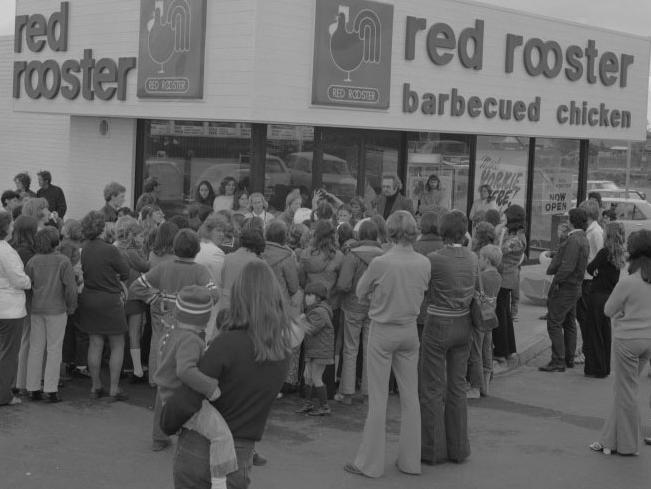 In those days a whole roast chicken was selling for $1.95. Peter Kailis then developed the Hawaiian Pack: a quarter roast chicken, chips and a pineapple and banana fritter. Now known as the Classic Tropicana it remains in the range, although the banana fritter has been replaced with a second ring of deep fried pineapple.

By the time the business was sold to Myer in 1982, there were 80 stores. In 1986 Coles Myer bought the Big Rooster chain in the eastern states and changed their name to Red Rooster. The brand changed hands several times over the following decades and in 2010 the company-owned stores were converted to franchises. PAG Asia Capital  bought the parent company, Craveable Brands in 2019.

In the late 1980s, the big drawcard for my kids was the wedges, at that time virtually unknown in Australia. These chunky potatoes  later appeared as bar food in pubs accompanied by sour cream and sweet chilli sauce. Sadly, they are no longer on the menu, removed long ago in favour of ordinary chips.

As of 2018 the chain had 359 stores across Australia. An online delivery platform and national delivery was rolled out in 2016.