Salada biscuits are among Australia’s favourite crackers or, as we used to call them in my youth, dry biscuits. Originally made by the Brockhoff biscuit company in Burwood, a Melbourne suburb, the Salada is now made by Arnott’s and is distinguished by its ‘man-size, snack-size, bite-size’ versatility. Except, like toilet paper, it doesn’t always break along the perforations.

Arnott’s say the Salada  is made of flour and wheatmeal, 100 % certified sustainable palm oil from Malaysia,  locally grown non-genetically modified canola oil, yeast and baking soda. How healthy is it? In the Huffington Post, dietitian Sanchia Parker rated it well for fibre content and lack of saturated fat, but marked it down because of the salt content. And CHOICE put the Salada halfway down the list when it came to healthy food ratings, allocating it 2.5 stars – way below the 5-star Ryvita Multigrain, but considerably better than Nabisco’s Ritz at just one star. 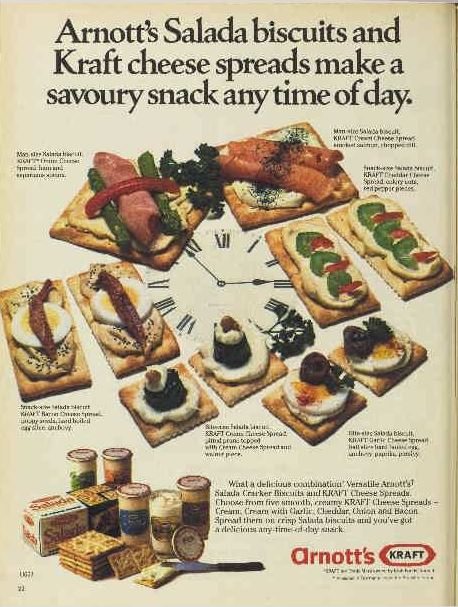 Brockhoff was among many Australian biscuit companies that merged with Arnott’s in the 1960s, their names eventually vanishing under the all-encompassing brand that’s now owned by an American private equity company.

After the merger, the old Brockhoff factory (and the oven in which the Salada was baked) continued as before, albeit under new ownership, so the transition from Brockhoff’s to Arnott’s went smoothly enough for many years. Then, in 2001, Arnott’s decided to close the Burwood bakery and move the production of Saladas to their Sydney plant.

And it was a disaster. At that time Australians were getting through nine million packets of Saladas, or 160 million individual Salada biscuits, a year. Around four million of those packets were being consumed in Victoria, the biscuit’s home state. We were eating enough Saladas to notice that the biscuits produced in the new Sydney oven just weren’t the same. Customers used talk-back radio to air their views and they definitely weren’t happy.

It seems Arnott’s called on one of their most experienced biscuit bakers to address the problem, which involved regulating the humidity in the new oven. Supplies were thin on the shelves for a while, but the cracker eventually returned to its former taste and texture.

Whew. At least they got that one right. Now there’s the issue of the holes in Arnott’s Vita-Weat. It seems they’ve got smaller, so the great Australian tradition of squeezing butter and Vegemite ‘worms’ through the holes in Vita-Weat biscuits is no more. It remains to be seen whether public outrage will force the biscuit manufacturer to mount yet another emergency response.