SAO biscuits are up there with Lamingtons among the “iconic” Aussie foods. They are  still made by Arnott’s. There are conflicting reports about the origins of the SAO name. While some accounts say they’re named after a boat, it’s widely believed that SAO stands for Salvation Army Officer. This was in honour of William Arnott’s son Arthur, who joined the Salvation Army .

SAO biscuits are made, according to the manufacturer, from “seven layers of flaky pastry” which gives them their “distinctive light bubbly texture”. They are fondly remembered by generations of Australians for their small holes. When two buttered biscuits are squeezed together,  “worms”  of butter emerge from the holes. The effect is intensified if the filling includes Vegemite. 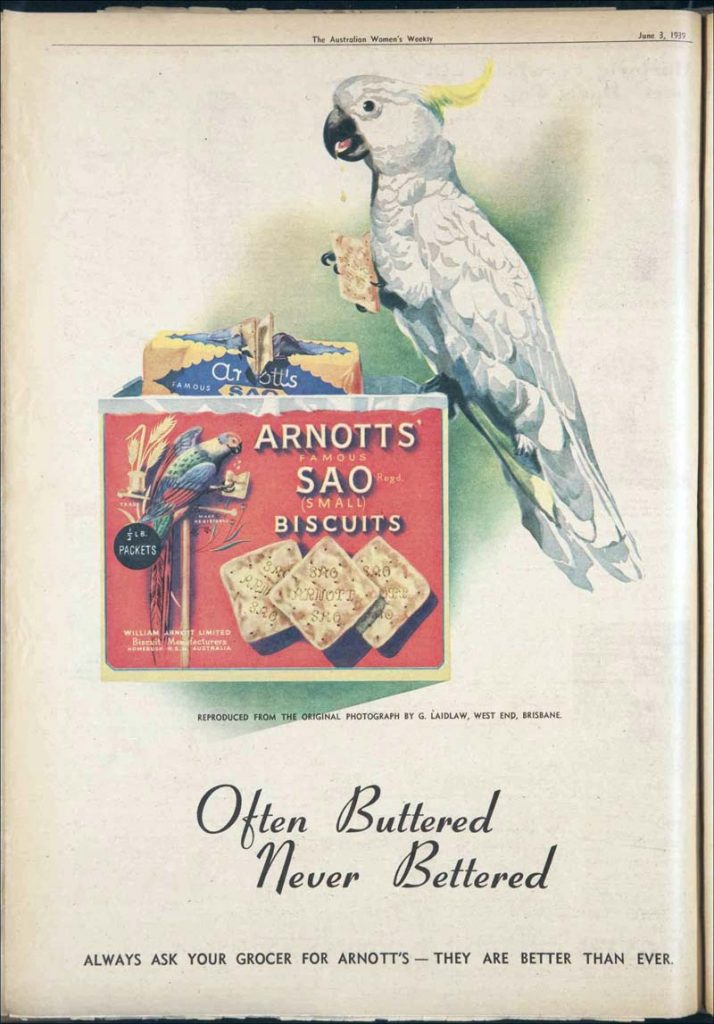 The SAO trade mark was registered in 1904 and the brand was introduced two years later. The Arnott’s pack gives two possible sources for the name. The Salvation Army prefers the story that the SAO honours Arthur, one of William Arnott’s five sons, who became a Salvation Army Officer. The other possibility is that the biscuits were named when a clipper sailing ship, the Sao Paulo, arrived in Newcastle harbour.

A hundred years after their launch, Australians were eating more than seven million packets – or 190 million SAO biscuits – a year. The size of the biscuit makes it a good base for a substantial snack. They can also be used to make the SAO Vanilla Slice, complete with sweet icing on top.

When I was growing up, we called SAOs and similar savoury products  “dry biscuits: to distinguish them from “sweet biscuits”. Now it seems Arnotts have adopted another Americanism  and they are officially called Sao Crackers.