In the 19th century there were few national brands. Before the Australian colonies decided to federate, each had its own independent manufacturing base. Biscuit companies tended to sell their products in their home markets and this continued long after Federation.

A F Brockhoff and Co was established in North Melbourne in the 1860’s by German immigrant Aldolf Brockhoff.  He was succeeded in the business by his son and, eventually, his grandsons. In the 1930’s the manufacturing operation moved to the Melbourne suburb of Burwood.  Brockhoff’s produced many notable cracker biscuits (or what we used to call “dry biscuits”) including Cheds, Salada and Clix. 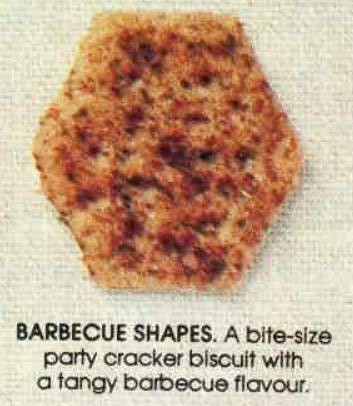 Savoury Shapes were an immediate success and were soon joined by other flavours, the first being Barbecue Shapes. Others followed, including Chicken Crimpy and Onion Shapes, and by 1973 Brockhoff’s were advertising four flavours: Barbecue, Cheese, Savoury and Turkey.

Despite the merger with Arnott’s and the 1966 change of name to Arnott’s Biscuits Pty Ltd, the Brockhoff brand lingered on for a decade. However, by 1974 Savoury Shapes were being advertised as an Arnott’s product. According to Wikipedia, by 2013 Australians were eating more than 53 million Shapes  every year.

Among the flavours introduced in subsequent years, Pizza Shapes stood out as a favourite. In 2016, controversy erupted when Arnott’s attempted to “improve” some of the popular flavours  including the classic Barbecue, Cheddar and Pizza options. The public did not respond well to the changes and after attracting a lot of abuse on social media, Arnott’s bowed to the pressure and reintroduced “original” versions of the biscuits.

More recently, when Arnott’s released an Australia-shaped Vegemite and Cheese version of the biscuit in early 2019, the company had to apologise to Tasmania for leaving the island state off the map. They blamed the limitations of the biscuit moulds, saying “instead of reducing Tassie to a few crumbs, we’ve decided to leave this beautiful island untouched”.