1936 Seafood cocktail on the beach

In 1936, The Mail, Adelaide, published a recipe for seafood cocktail as a suggestion for a beach party. It’s unclear when the first seafood cocktail was consumed in Australia, but according to legend its origins go back to the Californian goldfields in the mid-19th century. In the 1930s, the dish popped up on Australian menus and was associated with Hollywood glamour.

The seafood cocktail was preceded by the oyster cocktail. In the 19th century, in both Australia and the USA, oysters were a working man’s dish. They were commonly available at Oyster Saloons at low cost. Late in the century such an establishment in Australia might offer a dozen oysters for sixpence ‘with bread included’, although patrons might have to find another two pence if they also required butter.

According to legend, the oyster cocktail was invented by a California miner who would order oysters with vinegar, Worcestershire sauce, Tabasco, ketchup, and horseradish. We find references to oyster cocktails as early as 1868 in the San Francisco Chronicle and, by the 1890s the Americans had expanded the concept to include oyster, clam, lobster, crab and shrimp cocktails.

In Australia, the oyster cocktail seems to have first appeared as a drink. In 1890, the Evening News in Sydney published the following recipe:

Take a cocktail glass of oyster juice, and after putting in a few drops of Worcestershire sauce, add a little vinegar, season with salt and pepper, and serve.

Two years later, an article in the Brisbane Telegraph claimed this to be the “latest American drink”, although in this version the drink contained the oysters themselves, along with lime juice rather than vinegar. The drink (perhaps what we would now call an oyster shooter) was subsequently said to be all the rage at the Manhattan Club in New York and dubbed the “latest Yankee craze”. By 1900, oyster cocktail vendors were plying their trade at race meetings in Sydney.

The first Australian oyster cocktail recipe to resemble the seafood cocktail we know, in that it contained tomato “catsup”, seems to have appeared in 1901. In 1908, an even closer cousin emerges: the lobster cocktail. Described as “an appetiser for the beginning of dinner”, it reads:

One tablespoonful of horse radish, one of vinegar, one of Worcestershire sauce, two of lemon juice, one of tomato sauce, one half a teaspoonful of Tabasco sauce, one half of salt; mix well, put on ice for an hour; to this add the shredded meat of lobster till the quantity needed is reached. Serve in little glasses, surrounded by chopped ice if liked.

Closer still is the 1928 recipe for shrimp cocktail. It includes Russian dressing, a combination of mayonnaise and tomato ketchup with horseradish, pimento, chives and other spices. Despite its name, the dressing was invented by an American and sounds remarkably like the pink sauce (called Marie Rose sauce) that graces our traditional seafood cocktail. 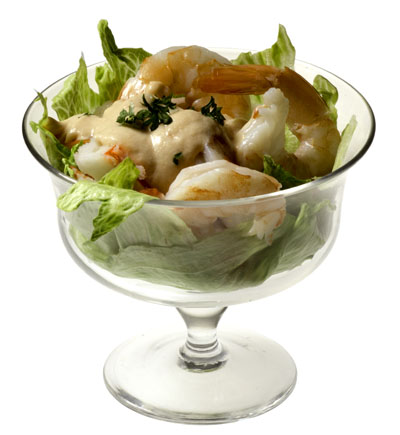 A prawn cocktail recipe in 1928 and the 1936 recipe for seafood cocktail do not have mayonnaise. The latter suggested the dish as “another bright idea” for a day at the beach. It mixed lobster, crabmeat and prawns with a sauce made from a small glass of dry sherry, two dashes of Tobasco  sauce. a teaspoon of lemon juice, two tablespoons of tomato sauce, a teaspoon of Worcester sauce, and half a teaspoon of chopped chives. “Mix well and stand on ice or carry in an iced vacuum flask until ready to serve,” the instructions read.

It wasn’t until 1953 that we find a recipe for “pink seafood cocktail“. This had the familiar mayonnaise and tomato based sauce and was served in “icy cold cocktail glasses”. By the 1970s, the whole shebang was being piled into the centre of avocados, as “avocado seafood” became a standard entrée at posh restaurants.

During the trendy 1980s we moved on from the seafood cocktail.  In fact, it became decidedly naff. But deep in the suburbs the memories lingered on, while the smart set reserved the dish for retro-themed parties where it was served with a snigger. Until, in 2009, no lesser publication than Gourmet Traveller declared the seafood cocktail an irony free zone. Of course, their recipe insisted that you made your own mayonnaise before combining it with the dead horse, cream, Worcestershire, brandy and Tobasco.

Beloved in the USA, Britain and Australia, is seems that, while you’re unlikely to find one in a hatted restaurant, this old favourite is here to stay.