Although giving away samples had been common at the various Royal and country shows for some time, it appears that showbags (or as they were then called, sample bags) first appeared in the early 1920s.  A humorous piece in The Sun, Sydney, in 1922 described one as “…a paper bag with a spinning top, a cake of nougat, a jelly crystal, a calendar and a monkey on a stick, for sixpence.”

The piece began: I went to the Show. It was a hot day.

Thousands of grimy people, carrying a wet handkerchief in one hand and a crushed sample bag in the other, swept round and round the ground till they got tired and went home.

It seems that, in the early days, many stalls at the shows distributed free (or low-priced) samples of their products which show-goers collected in a sample bag. It’s not clear whether the bags were branded. In 1926, The Advocate, Melbourne, reported that the bags were filled over the course of the day:

“Come buy! Come buy!” is the voice audible or inaudible from every stall. Answering to its call, passers’by come to a halt, and, meaning to carry away but one sample to “please the children,” excitedly tugging at skirt or mantle, end up in completely filling the firm paper receptacles with cord handles which have been for so many years a feature of Show Day purchasing. 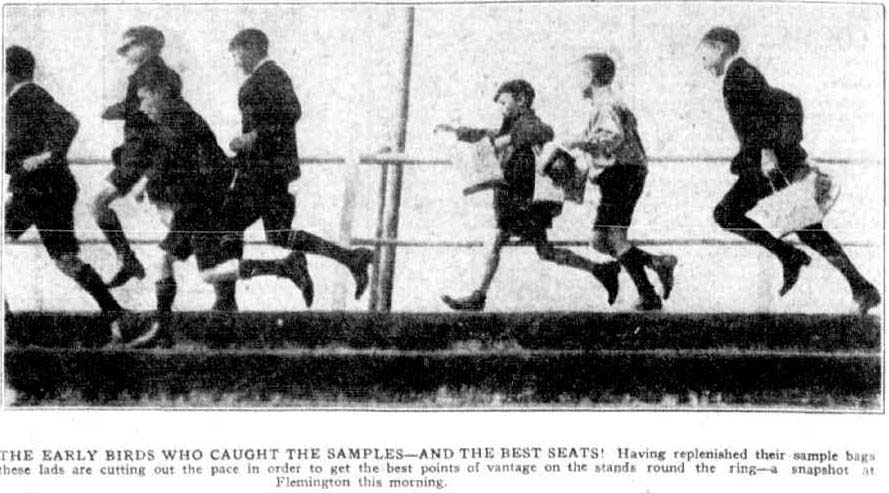 Showbags were embraced by food manufacturers. Articles from the 1920s mention the Mills and Ware’s biscuits sample bag at the Bunbury Show in 1924, the Oriental Tea Company and Hoadley’s Confectionery at the Newcastle Show in 1924 and the Aeroplane Flour bag at the Brisbane Exhibition (the Ekka) in 1926.  Plaistowe’s confectionery bag was popular in Perth in 1926. The Simpson’s Self Raising Flour bag at the 1927 Ekka included samples of several lines along with the flour, as well as “the latest edition of the Simpson recipe book – a handsome publication printed in several colours, an interesting colored book for the children (specially printed overseas) and a sample of Palms’ delicious chutney.”

While the number of bags took a dip during the shortages of World War II, the 1950s saw a big revival. In 1951 you could even get hot food in a sample bag, as the Jaffles stall promised. You can’t help but wonder what else was in that bag and how greasy it was after the jaffle had been consumed. 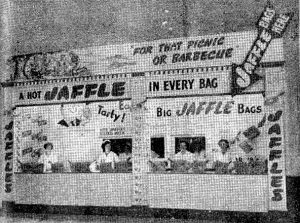 According to the Royal Agricultural Society of Victoria, sample bags started to be known as showbags in the late 1960s.  Confectionery companies continued to be among the favourites, with Hoadley’s, Lifesavers, Giant Liquorice and others giving kids their sugar fix. Making his debut in the Hoadley’s bag in 1963 was Bertie Beetle – now with his own bag and one of the most feted stars of the show.

At some point, showbags became plastic rather than paper and the graphics became increasingly tacky. No longer offering samples, many were purely selling merchandise, and the average price moved from a couple of shillings to between $10 and $25. Old-style showbags are now collectors’ items and bring tidy sums. The move against single-use plastics gained some traction in 2019 however, with some companies such as Allen’s Sweets (Nestlé) returning to paper. Hopefully it’s a trend.